My Beef with the Bridgerton Costumes

Yes, of course I watched Bridgerton. 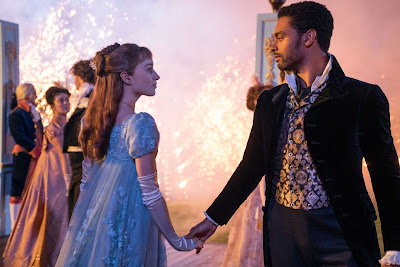 I had lots of opinions but generally I enjoyed it. Similar to my thoughts on The Great, I liked the idea of just embracing that this was a fantasy version of history. It was full of inaccuracies but its goal is to be fun and escapist. 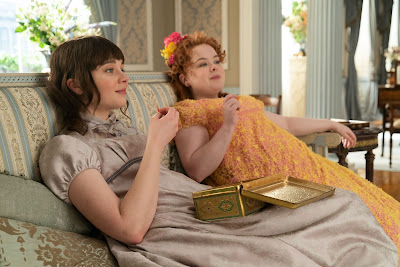 It was funny for me to see what kinds of inaccuracies I liked or didn't mind, and which ones infuriated me. Diverse cast? Great. Costumes made with bright, modern colors and embroidery that could only be done by machine? Ridiculous, but sort of fun. 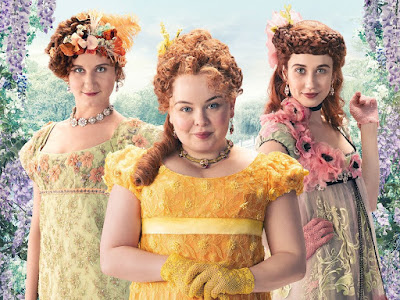 A scene when someone is being tight-laced into a corset? 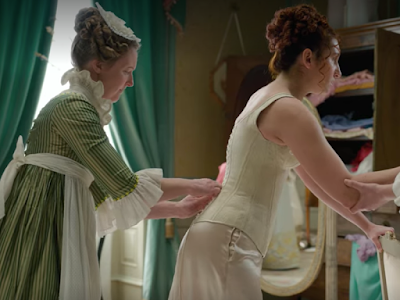 I watched several costume reviews on YouTube and my favorite comment about this scene was an exhausted fashion historian saying "I ain't got no time for corset bullshit" and I FELT that. (The same reviewer has a great video about corset myths if you want the full picture). There is a lot wrong with the scene but the basic thing is why would she try so hard to get a small waist in an era when dresses completely obscure the waist??

Well, actually that brings me to my second problem with the costumes. Why did Lady Featherington have a totally different silhouette than everyone else? Different neckline and tighter on the waist? I get that she is supposed to be "tacky" but the fabrics are already accomplishing that. Why give her distinctly different dresses than EVERYONE else? 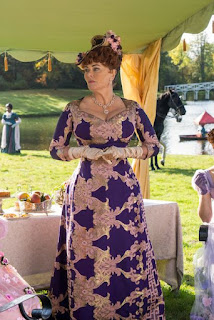 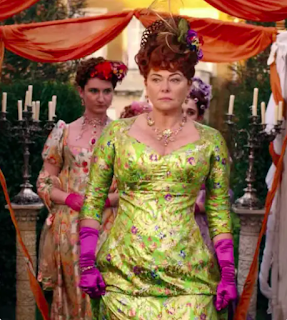 But perhaps my BIGGEST annoyance was the fact that QUEEN CHARLOTTE dressed in fashions that were at least 40 year old. She and her ladies-in-waiting were back in the 1770s while everyone else was generally in 1813 (except Lady Featherington who was just floating off into space by herself). 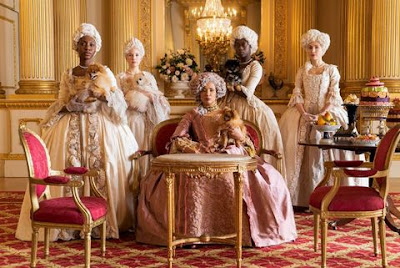 This is a weird period movie trope of having older, rich women wear things decades out of style. Not a few years behind. DECADES. Not a women who doesn't have the resources to stay up on the latest styles. A woman with RESOURCES. In this case THE RICHEST LADY IN THE COUNTRY aka THE QUEEN.

Like the corset thing, this one hits harder because it isn't just a fun, fresh idea that the production team wanted to experiment with. It is actually a dumb pattern that has been cropping up in period movies made in the 21st century. Here are some other examples: 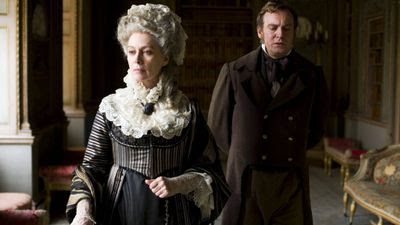 Cranford takes place in the early 1840s. Above is Lady Ludlow, who lives in a gigantic estate and is the richest person in the whole story. She dresses like it is the 1790s, with her hair from even earlier. 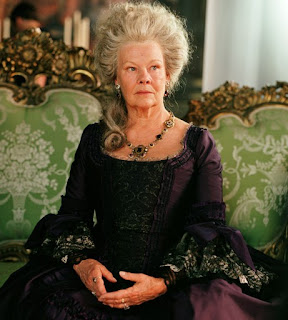 This is Lady Catherine de Bourgh in the 2005 Pride & Prejudice. Not only the highest status person in the story but arguably in all of Jane Austen. The movie is set in the 1790s, but she dresses more like the 1760s or 1770s.

It is also worth noting that, while she is not as rich, the movie makes a similar silhouette choice for Mrs. Bennett. 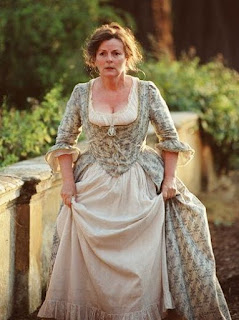 I haven't seen Sanditon, but based on the promo images, it is clear it has this same problem. 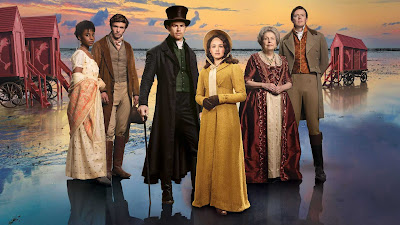 Everyone here is in the Regency period, except the lady on the right who is stuck in the Rococo.
These movies are all basically inventing this mythology that, in the past, the older and richer you were, the more stubborn you were about changing fashions. And not a little stubborn. Like, 30-50 years stubborn. This is simply not true. There have been some historical eras when styles changed radically in a short period of time, and some women (and men) did lag behind. But really we are talking a single decade behind at most, and even then a wealthy woman wouldn't be literally wearing her same old clothes. What happened instead was usually some kind of hybrid-- she would have her dressmaker stick with some older elements that she was more comfortable with, but also include newer elements that kept up with the times as much as possible. Frock Flicks has a great recap of one of these "hybrid" eras which includes Queen Charlotte (and debunks the idea she didn't update her fashion). 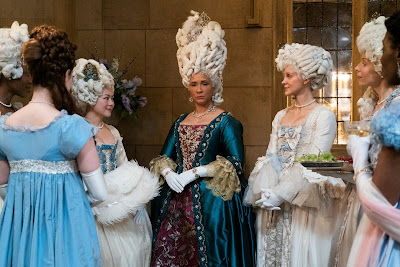 Now, to be fair, Bridgerton used this nonsense choice to put Queen C in some gorgeous gowns and fabulous wigs, so I'm not claiming she didn't look good.
But even when these older gowns are fab, it makes the production seem cheap to me. It automatically feels like some community theater show which simply didn't have enough options in their costume stock from the right period, and so makes it up. Same problem with Lady Featherington. Her styles seem vaguely 1960s to me, so it's like the time I was in the ensemble of a community theater production of My Fair Lady and was wearing a 1970s dress for the big ball scene. I wasn't the lead and it was the best they had on hand. But I suspect "this the best we could do" wasn't the vibe Bridgerton was aiming for.
In summary, I made this Venn diagram: 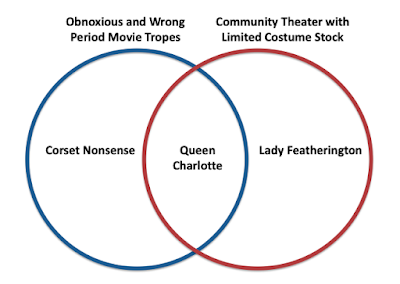 Posted by ClaraBerg at 4:26 PM