You guys. I just invented something awesome. Coming to an infomercial near you:


Here is the mind-blowing invention story: We were switching up the dress on the 1920s mannequin and the new dress was looking pretty good. BUT we were having problems with the neckline. For one thing, the V in the front was going just a tiny bit too low and you could see the line where the hard upper torso transitions to the soft body lower torso. We also hadn't put in a barrier layer between the top of the mannequin (not made of an archival material) and the dress. As we contemplated quickly sewing a camisole and padding the shoulders to lift the neckline of the dress, we wondered if there was a faster, easier option. Then our eyes fell on a pair of pre-washed pantyhose. 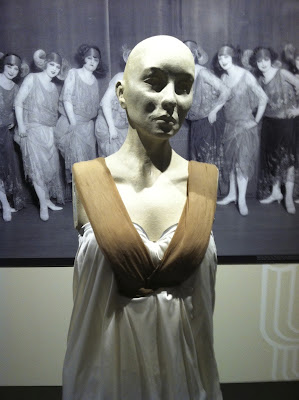 Business in the Front 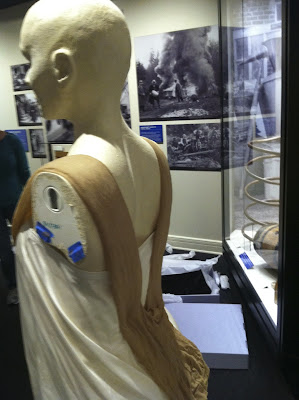 Panties in the Back 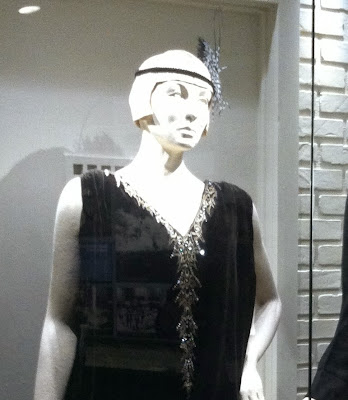 You may now start throwing money at me.
Posted by ClaraBerg at 8:31 PM No comments:

The Daily Tragedy and Comedy of Artifact Care

Here, in three photos, is a short but gripping tale. Starring: a Padded Hanger. 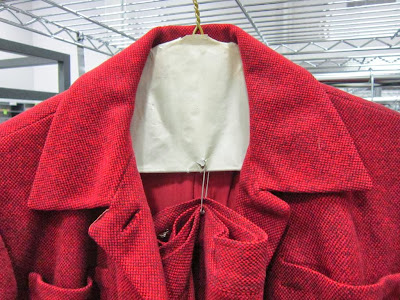 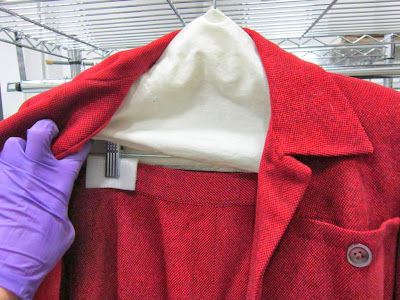 But lo! A padded hanger with padded volara clips! 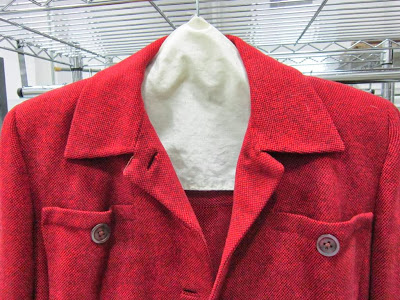 BLISS
Posted by ClaraBerg at 6:33 PM No comments:

Innovation and the World of Tomorrow

The big news at MOHAI this week was that we opened the Bezos Center for Innovation-- a permanent display in our new building funded by Jeff and MacKenzie Bezos (Jeff founded a little local business called Amazon.com).

The public opening was yesterday, but Friday morning was the private VIP brunch. It was high security because both the governor and Mr. Bezos were there, so the planners requested staff help rather than recruiting volunteers. I was assigned to coat check which I was happy about because it was basically just my regular job. Step 1: Assign numbers to incoming clothes. Step 2: Keep clothes in order. Step 3: When asked to retrieve clothing, pray that you have done 1 and 2 well enough to find said clothing before someone gets upset.

Besides all the VIP guests, about half the audience were local school children. They submitted questions for Mr. Bezos to answer during a Q&A, and after the program they got to explore the new displays. Unfortunately, no one asked any hard-hitting questions like What is Anna Wintor like in person? and How hard did Miuccia Prada try to ignore you during all the Met photo ops?


The really exciting thing about the child-friendly aspect of the event was that the box lunches were served in adorable collapsable containers. After the event was over, the staff rushed the table of leftovers. I was not alone in being super stoked about all the portable meal possibilities.

Once the morning event was over I went back the other MOHAI building to get some regular work done. One of the things on the agenda was unfolding this large fabric banner which had been wadded up in storage until now. All we knew was that it was from a Soviet display at a 1972 trade fair in Seattle, and that it should be about 10 feet by 12 feet. As we started to unfurl it, it because obvious that those numbers were not even close. We never got it completely flat because we ran out of space, but our estimate was closer to 40 by 45 feet. Oh, and it was also really cool.

It was this colorful, energetic, almost psychedelic celebration of space exploration and Soviet cosmonauts. To give you a sense of scale, here is collections manager Betsy waving back at our space-journeying friend. 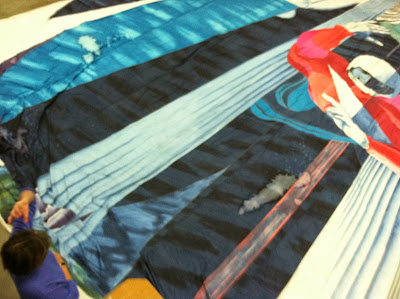 To Infinity Improved Storage-- and Beyond!
Posted by ClaraBerg at 3:41 PM No comments:

Reasons Why I Don't Enjoy Camping

#23: You have to stuff big puffy things into small bags

On Monday I was accessioning a sleeping bag (such is the life of a Seattle textile expert) and I was reminded of how much I don't like the concept of the stuff sack. I mean, I understand that the smaller the bag the easier to tote around, but when I'm getting ready to go to sleep or when I wake up in the morning, the last thing I want to do is play clown car with my bedding.

The bag in question was a brand-new Eddie Bauer bag for sub-zero temperatures, and it came in a medium sized canvassy sack. At first I thought I could do everything I needed (label, photo) without actually taking the bag out of its bag, but eventually I decided that was probably bad practice. So I disgorged it, and it emerged on the table like some slippery larva emerging from an egg.

And at the bottom of the bag was...another bag! A tiny, tiny lightweight stuff sack for your actual camping needs. My fragile arm muscles fainted at the thought. This thing was easily 1/4 the size of the canvas sack, and I had a hard enough time getting it in that. But I suppose if you are getting ready to climb K2, concerns like "arduous daily stuffing ritual" ranks somewhere below "I need to make room in my gear bag for food" and "I would like to not freeze to death while sleeping."

Amazingly, by living indoors, I avoid all those concerns. No stuffing, no freezing to death. Although now that I think about it, I do sometimes have difficulty with fitting all my lunch tupperware into the bag I take to work.

#3 Being indoors is so nice!

At the end of this week I had a classy indoor adventure. I was asked to speak at the Women's University Club--a historic private club in downtown Seattle. I was reprising my John Doyle Bishop talk and wasn't particularly nervous about it until Thursday when the Seattle Times published a profile of the WUC and it's 100 year history. Why did this make me nervous? Mainly the knowledge that this "oasis of sisterhood" had previously hosted the likes of Audrey Hepburn and Eleanor Roosevelt. Yikes! No big deal. Totally calm.

The lecture itself went really well. In reality the hardest part was the lunch beforehand where I had to be classy and pretend to eat like a lady instead of my usual practice of shoveling food into my mouth.

So in summary: no to stuffing sleeping bags. Yes to food.
Posted by ClaraBerg at 5:52 PM No comments: