If you want to work with artifacts in a museum, you also have to be ok being a mole person. Light is bad for the collection, so storage areas are ideally windowless. Collections staff usually work near the collection, so it usually doesn't work out architecturally to have an amazing view office adjoining a storage space that doubles as a fallout shelter.

I am now splitting my time between my charming elevator-adjacent office at the "old" museum and a climate-controlled room with the windows blacked out at the "new" museum. As a person who cares about artifacts, I love that room. It is temperature and humidity controlled, and the dim lighting protects the objects from all those harmful UV rays. But as a human being I sort of hate it. Normally I'm not one of those people who gets upset when they don't see the sun for a few hours (or months--I am a Seattleite after all), but that room is dark and I often wear my coat all day because the thermostat is set at like 67 degrees.

This week I came in for work and found out the mount maker was out sick. Basically the whole reason I am reporting to the new museum is to babysit a room of artifacts while the mount maker builds things and goes in and out installing stuff in cases. If she isn't there the door stays locked and I don't need to be there. I could have hopped back on the bus and gone back to the old museum for a vacuum-a-thon, but I had a bunch of work I had planned to do on my laptop and the gassy smell in the conservation lab has been making more appearances. So I decided to stay at the new museum, but move myself to a warm sun-dappled conference room that overlooks Lake Union. It was AMAZING. I can't believe how productive I was. I created this spreadsheet about our stock of mannequins and which ones had necks or not and it was like THE MOST RIVETING THING I HAD EVER WORKED ON.
Posted by ClaraBerg at 9:47 PM No comments: 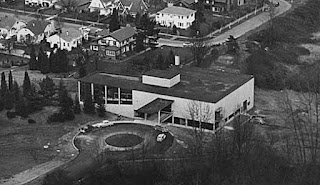 One of the main reasons my museum is moving is that a freeway extension is about to built right on top of us. The upside is that right before we vacate we can do things like roller skate through the building and write on the walls, but the downside is that nothing is getting fixed any more and the place is sort of going to seed.

A couple months ago a visitor stole the faucet handles in one of the bathrooms. Only one handle was replaced since there is only cold water in the building anyway. When the movers needed to have better access to a large cabinet, they just cut a giant hole in the wall. Things like that. Now the creepiness level has been raised because the museum is closed to the public and some of the staff have moved to the new off-site building. So large areas of the museum are dark and I'm often the only one down in my department.

Last week I was alone in collections, vacuuming an artifact. There was a strange smell in the area which hadn't been there before. I kept trying to ignore it and tell myself it was nothing, but it was really bothering me. It also smelled vaguely like gas. So it was that awkward moment where you don't want to be that person who has a "delicate" nose and complains about stupid things, but you also don't want to be that person who dies in a back corner of the museum and isn't found for three days.

Our regular facilities guy is rarely in the building because he is busy with our two other buildings (you know, the ones that aren't going to be demolished in six months), so I sought out our exhibits head who is knowledgeable about the building as well. The boiler room is right next to the conservation lab (awesome!) so at first he was unconcerned and thought it was just a regular smell emanating from our ancient heating system.  Just to be safe he decided to take a look around, and I went back to what I was doing. It seemed like he had been in there a long time, and I started to wonder how long I should wait before assembling a rescue mission. But right as I was imagining dragging him to safety before the fumes overwhelmed me, he came out wiping something smelly off his hands.

"Well, it was probably good you said something."

Turns out there was a small leak and something gross was dripping. The facilities guy clearly knew about it because he had put a bucket out, but the bucket had just now overflowed. So the full bucket was moved out of the way and replaced with an empty one.

Posted by ClaraBerg at 9:44 PM No comments:

One thing that is awesome about my job is that I have a pretty eccentric range of tasks. This week I took time out of my normal vacuuming and boob-shaping schedule to make paper hair for my mannequins.

If that didn't make any sense to you, maybe a visual will help: 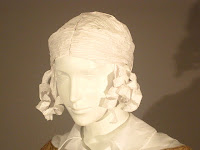 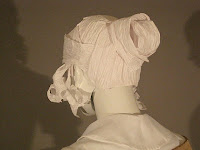 This is the paper hair I made in grad school. Pretty good for a first try. But, if I decided to pursue a PhD in advanced paper hair arts, I could be producing something like this:

Why paper hair? Well, mannequins can be creepy. Too abstract and you get ominous blank faces and missing limbs. Too realistic and you hit the uncanny valley and your visitors have nightmares. The nice thing about paper hair is that it gives the idea of hair and can be styled to represent different periods, but everyone knows you aren't trying to fool them into thinking it is human hair.


Speaking of creepy, here are the only two pictures I took of the process this week. I'm actually pretty proud of how this 1840s hair turned out, but it might be hard to tell how awesome it is while you are being distracted by the sight of a woman wrapped in saran wrap. 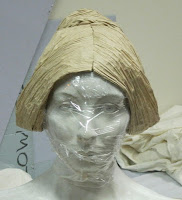 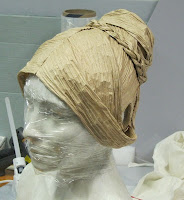 We were hot gluing pieces the paper to a buckram cap, and had the saran wrap there to stop the glue from seeping through the buckram and sticking to the head. Later I pulled a ribbon tightly across her face and left it overnight because I was trying to flatten part of the 1950s hairdo.

I think on my resume I will describe this as "mannequin torture craft projects." 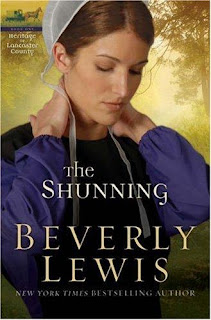 This weekend I accomplished a major task: I finished reading a trilogy of Amish romance novels. If you need a refresher on what the deal is with "Bonnet Rippers" please refer to my previous post here. Since I was so disappointed by my first foray into the genre, I decided to go for a classic: The Heritage of Lancaster County trilogy by Beverly Lewis. Lewis is the queen of Amish fiction and her first book in the series, The Shunning, is arguably her most famous.

As I hoped, the series was totally ridiculous. Lewis, like most authors writing in this genre, is not Amish herself and she is not writing for Amish people. These are books by and for Christians who have weird fantasies about "Plain People." You might guess that her descriptions of Amish life were a bit off, but the authors of these books spend lots of time doing research and often live near communities where they have befriended Amish people. As it turned out, the big challenge for Lewis was writing absolutely anything realistic about the modern world.

In the book, the main character finds out that she was adopted and that her birth mother is not Amish. When we first meet her mother, Lewis wants to let us know that the woman is rich. So she describes the woman:
-Being driven around by a chauffeur
-In a limousine
-Wearing white fur
-And a diamond choker

The book was published in 1997 and there is a reference to CDs and one person (a bad guy) has a cell phone. I think it is reasonable to assume that she is setting the series in the present day. As in NOT the 1930s.

In the second book Katie travels to where her mother lives in upstate New York. Turns out, she lives on an "estate" called Mayfield Manor, and is attended by servants including maids, a butler, cooks, and two chauffeurs. Most of the staff is apparently British, and they actually wear uniforms and maid's outfits when they work. There is also a scene where Katie goes to an art opening, which involves getting dressed up in formal attire, sitting down in an auditorium, and having a velvet curtain dramatically pulled back to reveal a painting.

The absolute best part is the huge fuss made over satin fabric. Katie first starts to suspect that something is up with her past when she finds a satin baby dress in her Amish parent's home. She also re-names her horse "Satin Boy" which somehow just sounds gross. When she gets kicked out of her church (Spoiler Alert: There is a shunning in The Shunning) she goes out to an expensive dress shop and asks to try on their fanciest thing. "Satin?" the shop girl asks knowingly. Actually, I prefer to imagine her saying it with panic and horror. "Fancy? Surely you can't mean SATIN?!"

Satin is a weave not a fiber. It is a technique that makes the fabric look shiny, but isn't an expensive process on its own. Silk satin is nice, but you can make some pretty cheap, tacky satin out of polyester. 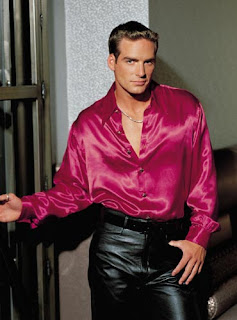 I think this clears up why "Satin Boy" seemed gross to me.

Posted by ClaraBerg at 10:43 PM No comments: