See You At The Fair!

Last week MOHAI opened an off-site exhibit celebrating the 50th anniversary of Seattle's 1962 World's Fair. The exhibit looks great and includes some dressed mannequins, so you should definitely check it out if you live in Seattle.

But most importantly, I looked amazing at the opening party. 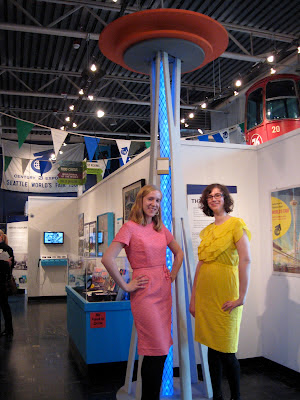 But back to the fair. Seattleites are pretty proud of their '62 World's Fair, and with good reason. The theme was the future and space, which was exactly what everyone had on their mind at that time. Within a few years, 1960s fashion would be all about futuristic looks and blasting off for life on the moon. It was also one of the last financially successful World's Fairs in the 20th century, which is fun because it gives us the opportunity to feel superior to New York. New York held its own World's Fair in 64/65, and because of the close proximity of time, there was a bit of a rivalry between the planners. Both fairs were attended by millions and had lasting impacts, but New York's nearly ended in bankruptcy. Also, never ever believe anyone who says Belgian waffles were a product of the NY World's Fair. They were a popular hit there, but the American debut was in Seattle.

If you have 14 minutes and a passion for old phone technology, you should probably watch this video:


I assume everyone in the 60s was this excited and happy about everything. Extra exciting: Asian clothing, peep shows, DNA, and beepers.

This morning, I was extra excited to go to work. Instead of reporting to my regular desk at the old museum, I got to go to work at the new museum. I had only been there once before since I started my job. The construction was still in full swing, it was cold, and I was forced to wear an orange vest and a hard hat. Not a good day. 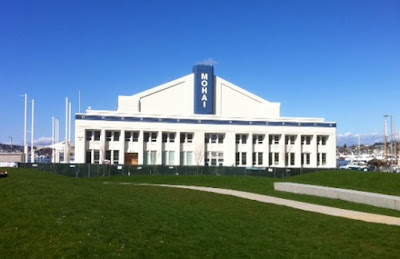 But this morning it was lovely out. I took the bus part of the way and walked the rest. I walked through the revitalized South Lake Union neighborhood, passing lots of hip Amazon.com workers on my way. As I approached the park, I almost got choked up with giddy tears.

The building is beautiful and the setting of the park, the water, and sky is really breathtaking. I felt so, so lucky to be part of the transition to the new space.

The main task of the day was to set up the room where all of the artifacts will be unpacked and organized before they get installed. Myself, three other members of the collections staff, and several members of the packing company arranged tables and talked logistics. Once we had a plan, we set to work. One of the tasks was to cover each table in a padded blanket. It would later get covered with a thin sheet of ethafoam, creating an archival-safe, soft surface for the objects to sit on. Us collections people were a little wary of the blankets since they were just regular moving blankets, not some acid-free, bleach-free, chemically inert, Oddy tested, blessed-by-the-director-of-the-Smithsonian product that we are used to using. But, figuring the ethafoam would provide a safe-enough barrier, we went on our merry way. That is until we started discovering that some of the blankets smelled musty. Some of them reeked, and some of them only stank softly. Were all of them bad? We couldn't tell. Before we knew it we were sticking our noses in each blanket, calling people over to offer second opinions, debating which part of the blanket was best for smell-testing, and eventually confusing our noses so much that we couldn't tell if the smell was on everything or if we had just gone crazy.

The final assessment? We had a big batch of musty blankets that could absolutely not be used with artifacts. Instead we ordered thicker ethafoam to cover the tables.

But that was all beside the point. The point is, in a few weeks I am going to be showing up regularly to install artifacts here:

Posted by ClaraBerg at 7:59 PM No comments:

More on the Hydroplane Move

Click the link below to watch a video of the Slo-Mo move. It includes some good footage of Slo-Mo getting lifted out of the museum, as well as a sense of what a miserable rainy day it was. I am in the background of the shots where the boat is still inside the museum. But mostly I'm being blocked by my friend Curt. Jerk.
http://www.komonews.com/news/local/Record-setting-50s-Seattle-hydro-to-get-a-new-home-146608685.html?tab=video&c=y
In other news, yesterday I scrubbed a 100-year-old rain poncho with a dry sponge. Good times.
Posted by ClaraBerg at 11:34 AM No comments:

This is outside my area of expertise. I love it. 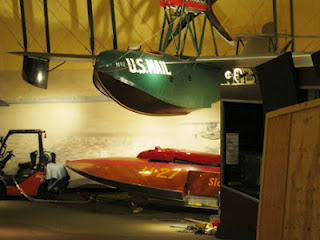 I am glad I have a specialty. When someone has a question related to clothing or textiles, they come to me. I have my own little room where the mannequin dressing gets done, and in our new location there is going to be a separate room for the costume collection. So far, having a niche interest has served me well.
But I also feel very lucky to be working at a museum that isn't only focused on clothing and fabric. My classmates who got jobs at the Met Costume Institute or the Museum at FIT clearly have awesome gigs, but when was the last time they watched a crane lift a 4,500 pound historic object out of the second story of a building? Well, I did that on Tuesday.
These days it seems like every other week some major artifact is getting moved out the door. First it was ship's figureheads. Then it was a giant neon sign. Most recently we had some plane people come in to take down and move the Boeing airplane that has been on display for the entire history of the museum. (Side note: every time someone would refer to the "plane people" I would think "plain people" which is a term for the Amish. Then I would be sad that Amish people weren't coming to help with the airplane). Taking the plane down took about a week, and every time they took off a wing they would enlist the help of everyone in collections to carry it into the conservation area. They would assign us all to a spot and remind us to stay quiet unless there was a problem. If there was a problem the only acceptable word was "stop," not "whoa" or "wait". We sucked in our waists as we went around corners and discovered arm muscles that we didn't know we had. It was sort of awesome.
I'm glad I'm not in charge of any massive artifacts, but it is fun to have a job where in one week you get to see a boat "fly" out the side of a museum and an airplane fuselage go rolling through the galleries.
Posted by ClaraBerg at 12:58 PM No comments: