True Tales of the Antiques Roadshow 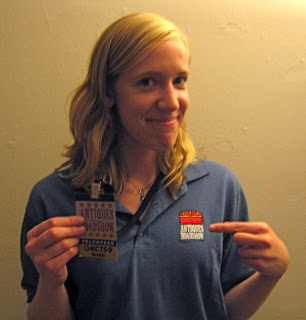 (Just as a warning- this is a long post. If you have always wanted to know the inner working of Antiques Roadshow, this is your lucky day. If you barely care, skip to the last paragraph for the #1 best part of the story.)

We had training on the Friday before and got our jobs assigned. Some assignments seemed uninteresting, but also low pressure (standing at the front door and greeting people) and others seemed exciting and high pressure (working with the camera crew but wearing a headset and running around all day). In the end, I played my cards exactly right and found the perfect job: working on the set, directing people into the line for the Rugs and Textile appraisals.

When the day started, I chatted with the appraisers and tried to casually let it slip that I knew a bit about fashion and was sort of an expert on local stuff. One of them was actually interested, and before I knew it I had him jotting down notes about John Doyle Bishop.

Most of the day consisted of managing a line of people. Basically the Antiques Roadshow set is one big circle, with tables of appraisers along the interior perimeter. In the center of the circle is the filming crew and the areas for the on-camera appraisals. The appraisers are divided into categories (pottery, furniture, Asian art, prints), and there is supposed to be a short line in front of every table. When you watch the show, you see lots of people milling around in the background: these are people lined up for appraisals and the volunteers trying to jostle them into the right position. On the outside of the big circle are much, much longer lines for each category. My job was to walk people from the longer hidden line, into the shorter on-set line, and to keep people from sneaking directly into the shorter line. Going to the Antiques Roadshow means lots and lots of waiting (6,000 people came through with two items each), so the main thing that was stressful was dealing with grumpy people in the longer line. By the time they saw me, most had been waiting in different kinds of lines for several hours. But after a few seemingly-tense situations, I discovered that the biggest grumps transformed into cheerful, wide-eyed folk as soon as I led them on set.

Speaking of waiting, I realized that if you were excited about the possibility of getting an on-camera appraisal, you should be careful what you wish for. If an appraiser thought you had a TV-worthy story they would call a volunteer like me over, I would go to the volunteer in my section with a headset, and he would send in a request for a producer to come to the table. The owner of the object was sent away to wait, and when the producer came over the appraiser pitched the story to them and they decided if it is camera-worthy. Getting on television is also the goal of the appraisers because it means exposure for them and their business. So at any given time, there are a number of appraisers wanting to speak to the producer. At one point, there were people with objects waiting an hour and a half just to have the producer come over and decide if they were going to get filmed. IF they were picked for filming (sometimes they weren't) they would go into the green room to get makeup and wait to be called onto set. That wait could also stretch into an hour plus. 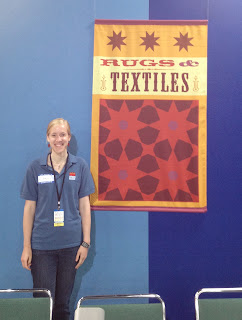 One thing that really surprised me was how much time the appraisers at my table spent with each person. I had three experts: Connie and Steven who specialized mostly in vintage clothing and accessories, and Jim the carpet guy. All of them spent at least five minutes, and sometimes what seemed like as much as 15 or 20 with each person. It made the line move excruciatingly slow, but I don't think anyone walked way unhappy from the table. Never once did someone get a "Meh. $10. NEXT!" appraisal. No matter the value, each item got the appraiser's full attention and they told the person as much as they could.

When it was time for my own appraisals, I found out that not every table worked that way. The line for textiles was long, but some of the lines, like painting, were INSANE and so the appraisers had to work very quickly. I brought in two pottery pieces that my parents owned that we had reason to believe were somewhat interesting and possibly valuable. I saw a different appraiser for each one, but I felt like both pieces were dealt with hastily and dismissed as unimportant. I was told one was "the type of thing you see a lot at garage sales" and the other was "only $300 to $500." I walked away defeated, but later realized that they could have told me all the same information in a better way and I would have felt a lot better. $300 to $500 for a tiny tea bowl that my Dad got for free?? Hot dog!

The day ended up being longer than planned. At our 6:30 release time there were still some substantial lines, so we all just kept going. Finally at 8, when most of the lines were done or at least down to the people inside the set, they told us to go home (the appraisers apparently stayed until the last appraisal was done). I was exhausted, but it was an awesome, fascinating, totally worth-it day. They said they would make Seattle into three episodes, airing sometime in early 2013. I think there is a good chance that the back of my head will be in a shot somewhere!

Ok, but I saved the best story for last. In the middle of the day, the appraiser I had connected with in the morning called me over by name (to be fair, I had a giant name tag on) to come look at something. In front of me was a woman with several hats. "What can you tell us about John Eaton?" he asked.  I couldn't believe it! As a museum person I couldn't say anything about value (I didn't really know anyway) but I talked about his store, his career as a milliner, and his legacy as a teacher. I even slipped in something about Gigi and Voulez-Vous. I shared my knowledge with this nationally recognized appraiser and got to tell the owner of the hats something interesting that she didn't know. Totally worth waking up at 5:30 am and standing around for 13 hours!
Posted by ClaraBerg at 9:15 PM No comments: 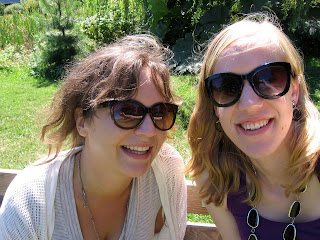 Last weekend I went to Vancouver! I rolled into town via my favorite transportation method (train) and was shown around by my awesome friend Danielle. Highlights included taking advantage of the nearly equal exchange rate to buy things I didn't need, visiting the Asian "night market" where we ate fried bananas and visited a booth that was selling bouquets made of stuffed animal heads, and watching Canadian coverage of the Olympics. We also saw an outdoor movie showing of Indiana Jones and the Temple of Doom which I had never seen before. It was...sort of bad. I thought the three other than Crystal Skull were the good ones but it was pretty racist and had a terrible love interest who squealed "I broke a nail" at least twice. Can I get some validation here? Am I speaking Indiana Jones blasphemy?

I also saw the single coolest piece of NW Coast Native art ever:


But the big reason I was there was to take in a fashion exhibition at the Museum of Vancouver.
It was called "Art Deco Chic" and was about clothing in the 1920s and 1930s. Besides the fantastic dresses, what really excited me about it was that the exhibition was within reach of what could be done at MOHAI. It was beautiful and engaging, but it wasn't on the level of the MET or the Museum at FIT where all the mannequins match and each room has some elaborate set. This was an impressive show at a local history museum.


The mannequins were really interesting because they didn't all match. They were clearly cobbled together from a few different sources and the curators had to do a lot of work trying to put the right dress with the right form.

Mostly, it worked. I can't remember any being particularly creepy or strange. 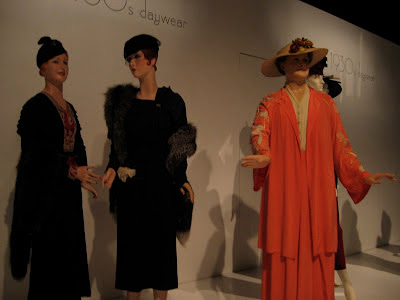 Oh wait, now I remember. Aunt Mavis there on the right seemed like she had wandered into the wrong show.

They also had some really cool accessories, particularly this purse shaped like a VW bug.

I left brimming with ideas and dreaming of the day when I would get to put on my own fashion exhibition. And wondering if I would ever be fabulous enough to pull off a hoodie dress. 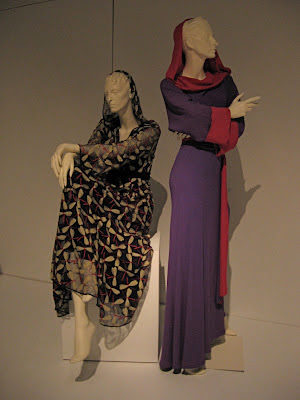 Posted by ClaraBerg at 10:04 PM No comments: