When that moth in the textile room was first spotted, I felt like this:

But, since operation bag and trap was completed there have been no new sightings. So that is good. But there are so many decisions to be made about how to deal with things and what kinds of precautions to take, that basically when people say the word "Moth" my reaction is now this:

Just leave me here on the floor and perhaps the moths will choose me to consume instead of the clothing.  It will be my greatest calling

But no, I have lots of exciting things to live for these days. Specifically: SHOES.

I realized I never posted pictures of the shoes I bought from Hourglass Footwear. I had a really hard time picking which of their dozens of styles to go with, but in the end I made some really good choices. First off, I got some gorgeous heels which are remarkably comfortable.


And then some flats. I really liked the pattern called Burlesque and also the green version  Wicked Ways. Since each pair is custom painted once you order, I asked if the pattern could be done in pink. No problem!


The latest shoe-based news is that Hourglass is going to donate a pair to the MOHAI collection! After the trying task of deciding which shoes to pick for my own feet I couldn't handle deciding what design to save for posterity in the permanent collection. So we decided to run a contest and let the public choose! Hourglass picked the six finalists (they are the best sellers from each of their artists) and you can vote here.

The winner will be announced at FASHION THEMED FIRST THURSDAY coming your way SEPTEMBER 5TH. Hourglass will be there, along with Prairie Underground and a representative from the Nordstrom Archives. I'm also putting together a small case of accessories from the collection and doing an audio tour about fashion on display. The full info is here. I have high expectations of it being an awesome day. I'm definitely wearing one of the above pairs of shoes.
Posted by ClaraBerg at 7:18 PM No comments:

Moth Panic: Not Just an Awesome Name for a Band

Just as everything was going great and calming down at work, the worst happened. THE WORST. We found a moth in the textile room. After all of our efforts to freeze and clean things and keep that room bug-free AAAAARRRRRGGGGGGGGG NOOOOOOOOOOOOOO


The moth was found near the hats, so we spent the next two days enlisting every spare pair of hands to hastily wrap up all the hats in plastic. Hopefully that will contain whatever is infested and protect the rest in case something is still crawling around looking for a home. We also put out moth pheromone traps and each day I check them anxiously. I can't decide though-- do I want to find a moth in the trap? If I do, it means the bastard is dead...but there are still loose moths flying around. If the trap is empty maybe the wrapping project successfully sealed up all the others...or maybe we just aren't catching them.


But basically now everything seems chaotic again. When I heard about the moth, I dropped what I was doing and didn't return until the hats were all packed up. I had been sewing artifact numbers on the Barclay Girls outfits and had literally left a needle part way through one of the pieces. Losing those days to hat packing set me back on projects I had been nearly caught up on, and now there is this added monster project of dealing with the hats.

Despite going into a moth-induced depression for about four days, I bounced back and tried to revel in all the things that still make my job awesome. On Wednesday I visited the workspace of Prairie Underground, a local clothing company that designs and makes everything in Seattle. I had been communicating with them about possibly donating some items to MOHAI, and so this week I made the trip to tour their space and see what they were willing to offer. I met with one of the founders of the company and was totally blown away by what she showed me. She went through a rack of about 15 things, telling a story about each of them and explaining why that style was important to the evolution of the brand. I had planned to take 1-3 items, so I knew I was in trouble when the first three all sounded like must-haves and there were twelve to go. I ended up narrowing it down to six. For five of them there were very clear reasons for why that piece was essential, but for the sixth I allowed myself to be drawn by aesthetics and what I thought would really be eye-catching on a mannequin. That sixth piece? A beautiful and comfortable bestselling style they call the "Mothette." 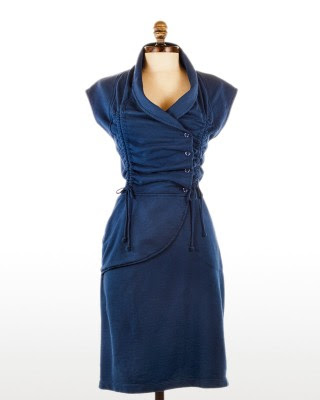 What does it mean?? Was I starting to sympathize with my hungry enemies? Or was my subconscious fantasizing about wearing this while slaying my mothy foes? GET OUT OF MY BRAIN YOU FABRIC-EATING MONSTERS!!!

Or maybe it is just a really kickass dress.
Posted by ClaraBerg at 9:24 AM No comments:

It has been a while since I actually did a post about vacuuming. Ready for this? 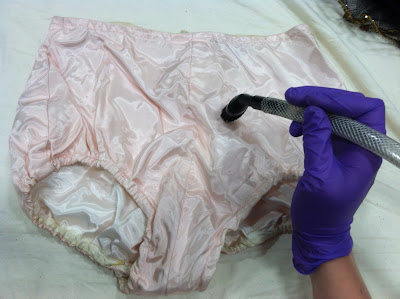 Ok, so technically it is part of a costume and probably worn over actual underwear. Remember the Can-Can dancing Barclay Girls? I am finally getting around to cleaning and accessioning those costumes. These pink satin things were layered under lacy see-through black underpants. The flesh-tone underneath the black lace gave the illusion that the girls were more bare than they were, while still passing the censors.

And that, ladies and gentlemen, was a thing I vacuumed today.
Posted by ClaraBerg at 7:12 PM No comments:

On Monday, one of my coworkers sent me two amazing photographs. 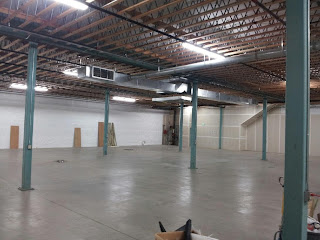 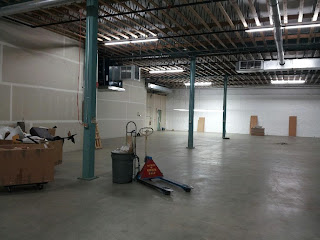 This is our old storage warehouse on the day we swept the floor and handed over the keys. It is surreal to see it like this. In January, when we started the process of moving out, the task seemed insurmountably big. This was a 10,000 square foot space that was absolutely crammed with stuff. Row upon row of shelving, objects in the aisles, things filling available floor space, and a back corner crammed with wood logs which we couldn't identify because they were blocked by several layers of tall furniture. Many jokes and comparisons were made to the final scene in that one Indiana Jones movie.


It was a storage space that MOHAI moved into in the 1980s, primarily to hold the furniture and the costume and textile collection. A lot of things were good about it-- it was secure, temperature and humidity controlled, and the company that owned the building was easy to work with. But no matter the best intentions, when a storage facility is off-site, it is too easy to just leave things there to be dealt with "later." We found notes left on things that were dated to the 1990s, post-its on boxes that said "infested with bugs!" and a giant ship's mast with no identifying information whatsoever.

But now, after seven months of planning, packing, unpacking, cleaning, freezing, organizing, and researching, the storage space is empty. Everything isn't "done" (I've got acres of follow-up vacuuming to do and will be working on inventorying stuff for the next few years) but it is on site and in front of our faces.

I had my last day in the old place the week before last, when I took my turn being the MOHAI representative during a craigslist sale of shelving and various unneeded items.  Our moving company partners helped negotiate the sales, and I carried around the cash in a little "True Value Hardware" apron that we had found among the supplies. Even with all the artifacts moved out, I still found myself instinctively protective of the space and its former occupants. Inquiries from potential buyers of the shelving went like this:

"So what did you keep here?"
"Stuff"
"Like, stuff that you sold?"
"Sure."
"What did you sell?"
"Things."
"What, like online or in stores?"
"Places."
Eventually one of them was so puzzled that he pointed at my apron and asked, "so you work for True Value?"
"Hahahaha NO."


When I started my current job, I was plunked into the middle of this massive museum relocation project. After Grand Opening my department jumped right into this next move project. Since day one everything move-related has been the priority. For over a year I've been splitting my time between two locations. Starting this week, I was at my desk every day, could schedule meetings whenever I wanted, and had the deep comfort of knowing that everything in the collection I oversee is here in the same building with me. I've done a lot of fun, important things over the last two years, but right now it feels like the real work is about to begin.

And I'm head over heels excited about it.

Posted by ClaraBerg at 4:15 PM No comments: