On Saturday I went to opening night of Seattle Opera's new production of Handel's Semele. I had some thoughts about the costumes.

Just to set the stage, this is a new production so it is all modern and edgy and has cool projections.


Everyone in Act I (the humans) looked like they were maybe in some sort of space movie. Here are some members of the chorus: 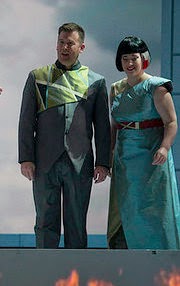 [trailer voiceover] IN A WORLD...
...WITH GEOMETRIC NECK WARMERS

Everything was all pointy and angular and hard edges. Semele's sister Ino was pointiest of all: 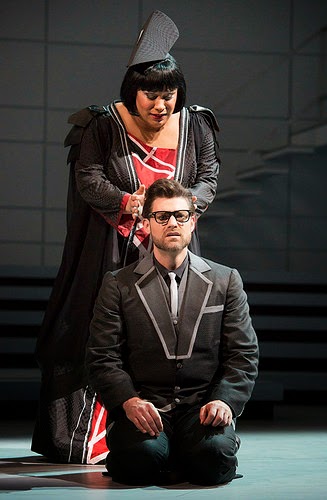 The whole gang was on a galaxy quest except hapless Althamas who looked like an adorable hipster who got lost on his way to the artisanal whiskey tasting.

Things picked up in Act II when the curtain went up and the audience burst into applause at the sight of Stephanie Blythe seated on her throne as Juno, Queen of the Gods. 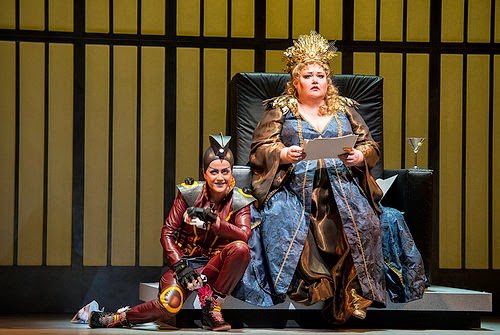 Points also for Iris who looked fantastic in her leather running suit.

From there we moved to Semele's heavenly "pleasure palace" (I kid you not, that is what it is called) which was all drapey and soft and sensual. So I guess that is why earth was so pointy? To make a contrast? I still wasn't totally on board.

In Act III we met Pasithea. I recognized her costume from promotional materials I received for the opera. Here is how it looked on paper: 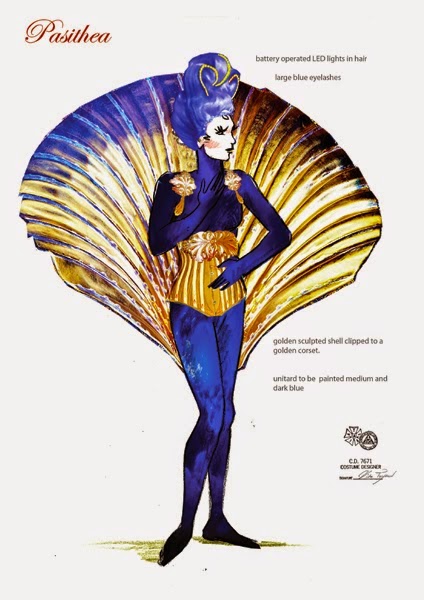 And here is how it turned out: 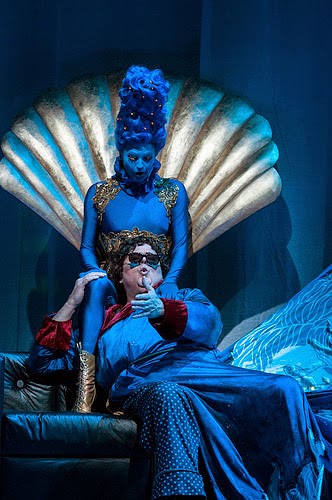 Generally, the dancers in blue body suits and blue face paint made it hard not to think about...

The opera concluded with more of the pointy space chorus and not, as the program promised, the uniting of Ino and hot hipster Althamas. But obviously that part was cut because Stephanie Blythe (who played dual roles) wanted to take her curtain call as Juno rather than as Ino and WHO CAN BLAME HER.

As soon as she saw those costumes she made the plan

So overall, it was a bit bizarre.  But the fact is that strange and interesting is always preferable to expected and boring. Because we just had the Oscars, I will use this red carpet analogy: Semele was sort of like the fashion choices of Tlilda Swinton. Sometimes weird, often awesome, but never bland. And that kind of risk-taking is always worthy of applause.

As for me, I wore a new dress that that made me feel like a powerful warrior goddess.

I can't show you an actual picture, because much like Semele seeing Jupiter's true form, the fabulousness would probably make you burst into flames.
Posted by ClaraBerg at 10:34 PM No comments:

Email ThisBlogThis!Share to TwitterShare to FacebookShare to Pinterest
Labels: opera

Ever have one of those moments where your so irrationally annoyed with something, that you realize that thing must be a pet peeve?


For me, this moment came recently when I was asked to rate something with an overly-inflated rating scale. Let me explain with an exaggerated example.

Say that you stay in a hotel, take a class, or buy a friendly weasel from your neighborhood ferret salesman. At the end of the experience you are asked to rank it based on the following scale:

Ok, pretty straight forward. But wait, it is a 10 point scale??

What drives me crazy about this is that since they have taken the time to describe each term, I assume that they mean it. I'm someone who doesn't give out perfect scores lightly. Heck, even when I love a movie I'm hesitant rate it five stars on Neflix because I mean, it wasn't Sense and Sensibility good.

So if that thing/person/experience was pretty great, but I think "very excellent" let alone "unbelievably exceptional" is pushing it, I'm going to give 5s and 6s. I also imagine that the person reading the review will be suspicious of anyone who rushed through it and gave all 10s, and will give more credence to the thoughtful person who gave a mix of scores.

But this is NEVER the case. Inevitably you find out that EVEN THOUGH they described 10s and 9s as exceptional in ways that few humans achieve, "all 10s" is expected as the STANDARD and anything less is seen as a failure. And by listing your ferret sales experience as a mere "excellent" you are giving them a black mark on their record which will inevitably lead to their firing.

And this makes me irrationally annoyed.
Posted by ClaraBerg at 9:46 AM No comments:

Last weekend I started a post about the busy, busy week I had just had, and about how much I was enjoying the city-wide excitement about the Seahawks. It felt like Hawks joy was in the air and we were all intoxicated with it. As I was working on the post last Sunday I thought, "I should wait to finish it until after the game so I can mention the result..."

And then Sunday night I was too sad to do anything. Like the rest of Seattle, I spent the last week in reflective, silent contemplation.

Here are some of the pictures I was going to post... 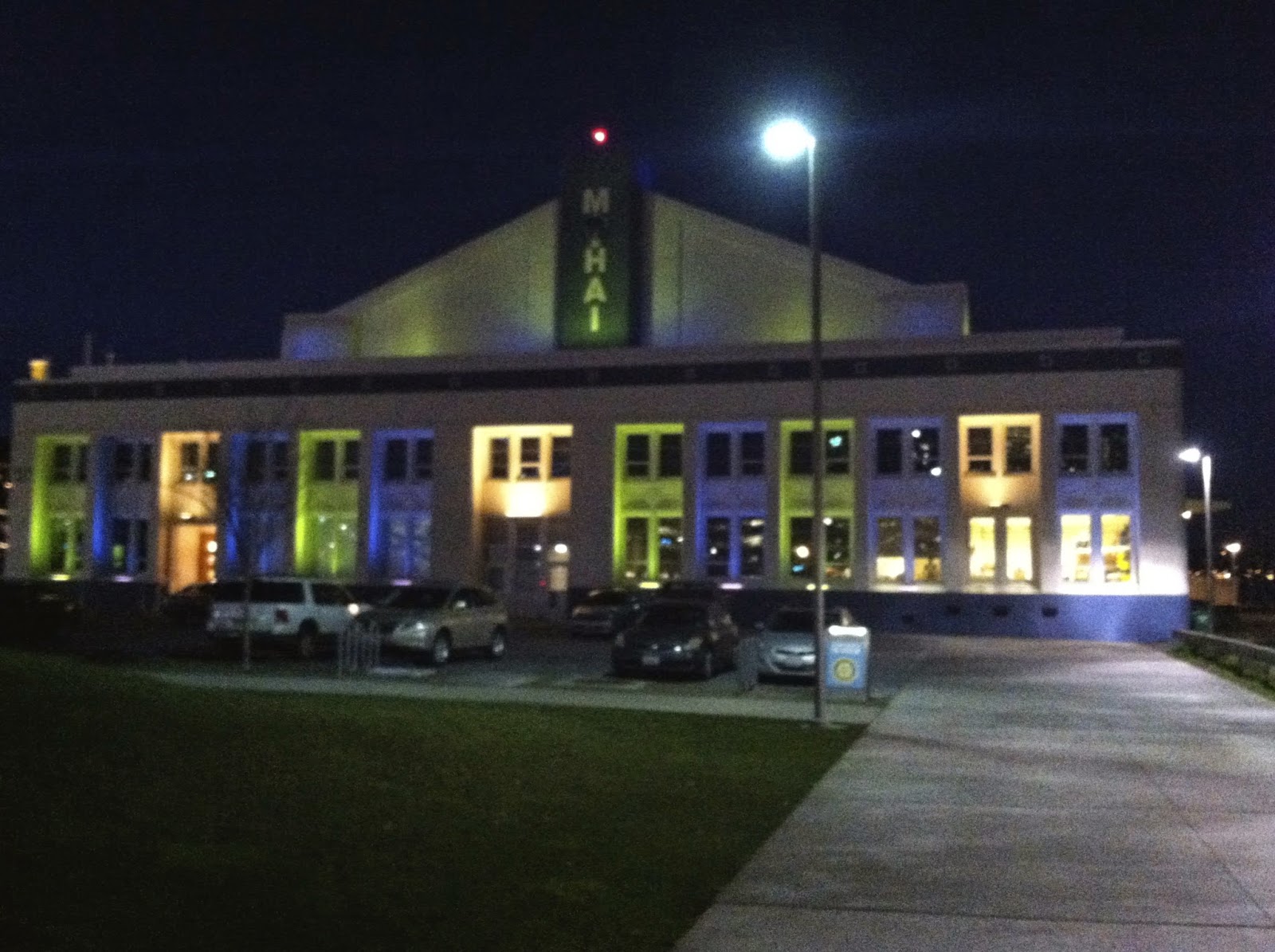 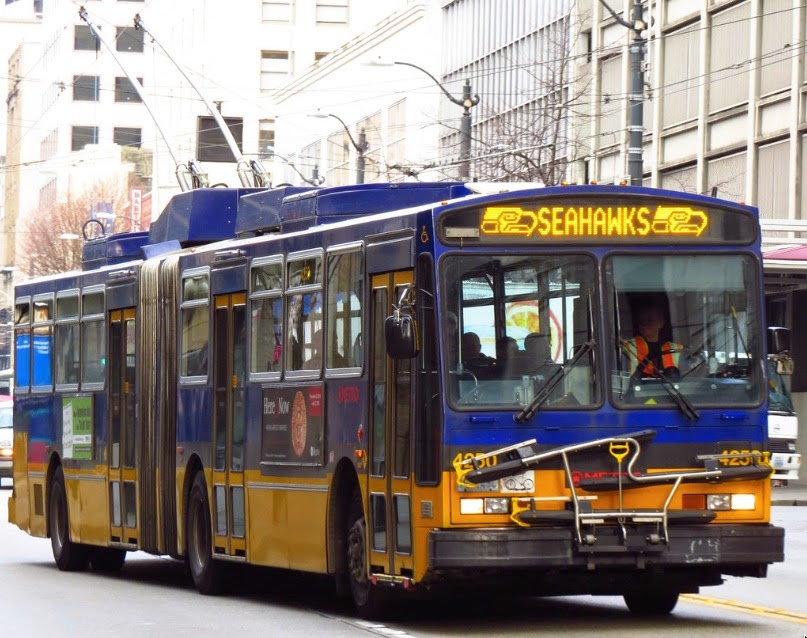 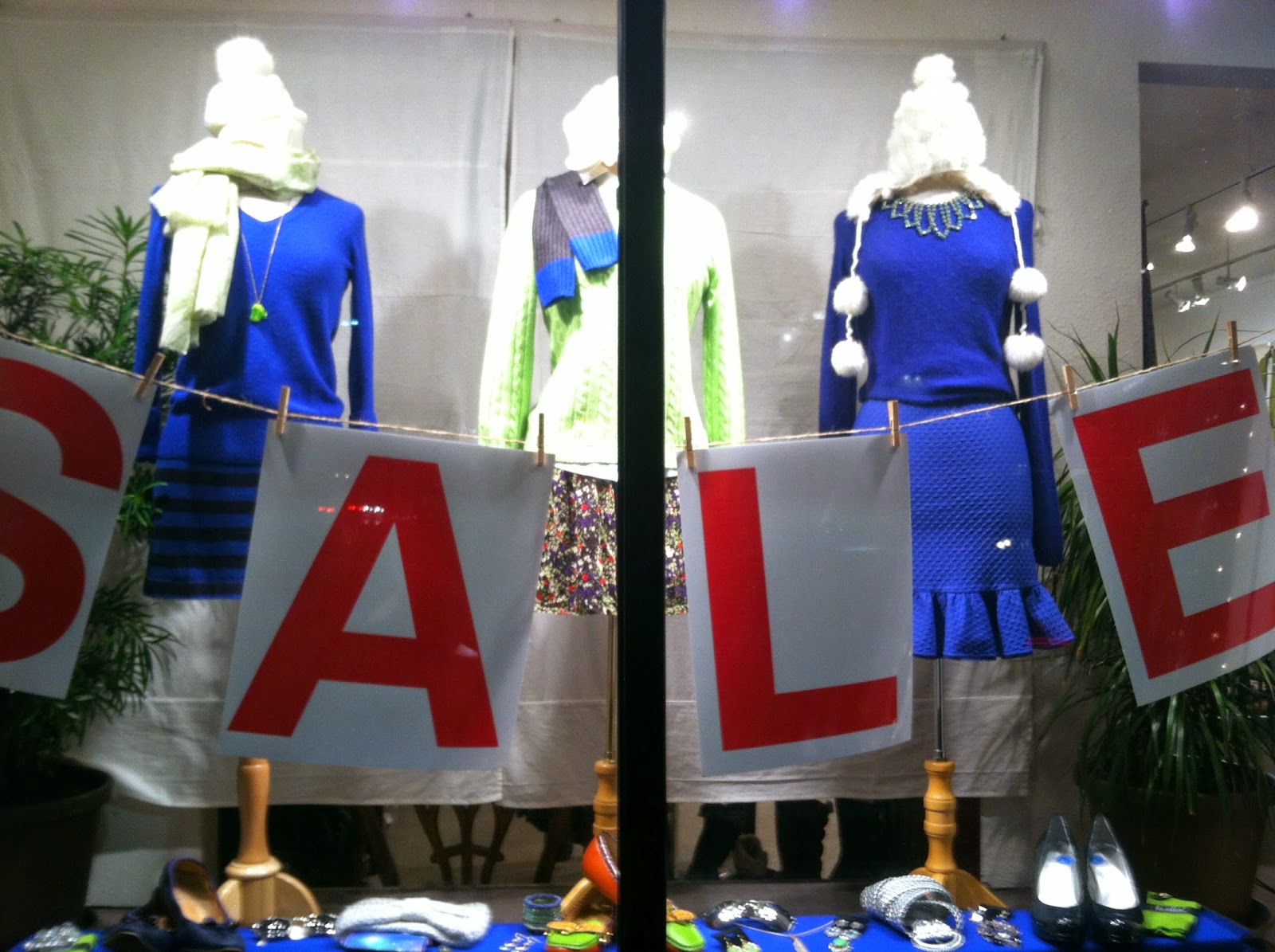 But the gloom is starting to lift and we can all return to our regularly scheduled lives.

Two weeks ago (pre-davastating Super Bowl loss) I had two presentations in three days. Tuesday was member night at MOHAI-- an evening to get our supporters all jazzed about 2015.  I talked about the recent mannequin rotation, an upcoming program, and some fun finds in the collection. It went quite well and lots of interesting people came up afterwards to talk to me. One woman was very excited to hear about my background and where I had gotten my degree. One of her questions was if I had a speciality, a particular era perhaps or a type of clothing?

"Well!" I said enthusiastically, "I specialize in Seattle fashion history!" as I gestured to the museum around me.

And she literally gave me this look:

And the struggle continues.

To be fair, we were not standing in front of one of the costume cases I had just been talking about. As it happened, were standing in the "Idea Lab" in the Bezos Center for Innovation which I haven't spent enough time exploring. While I was waiting to talk, I noticed this fantastic idea proposed by a young visitor: 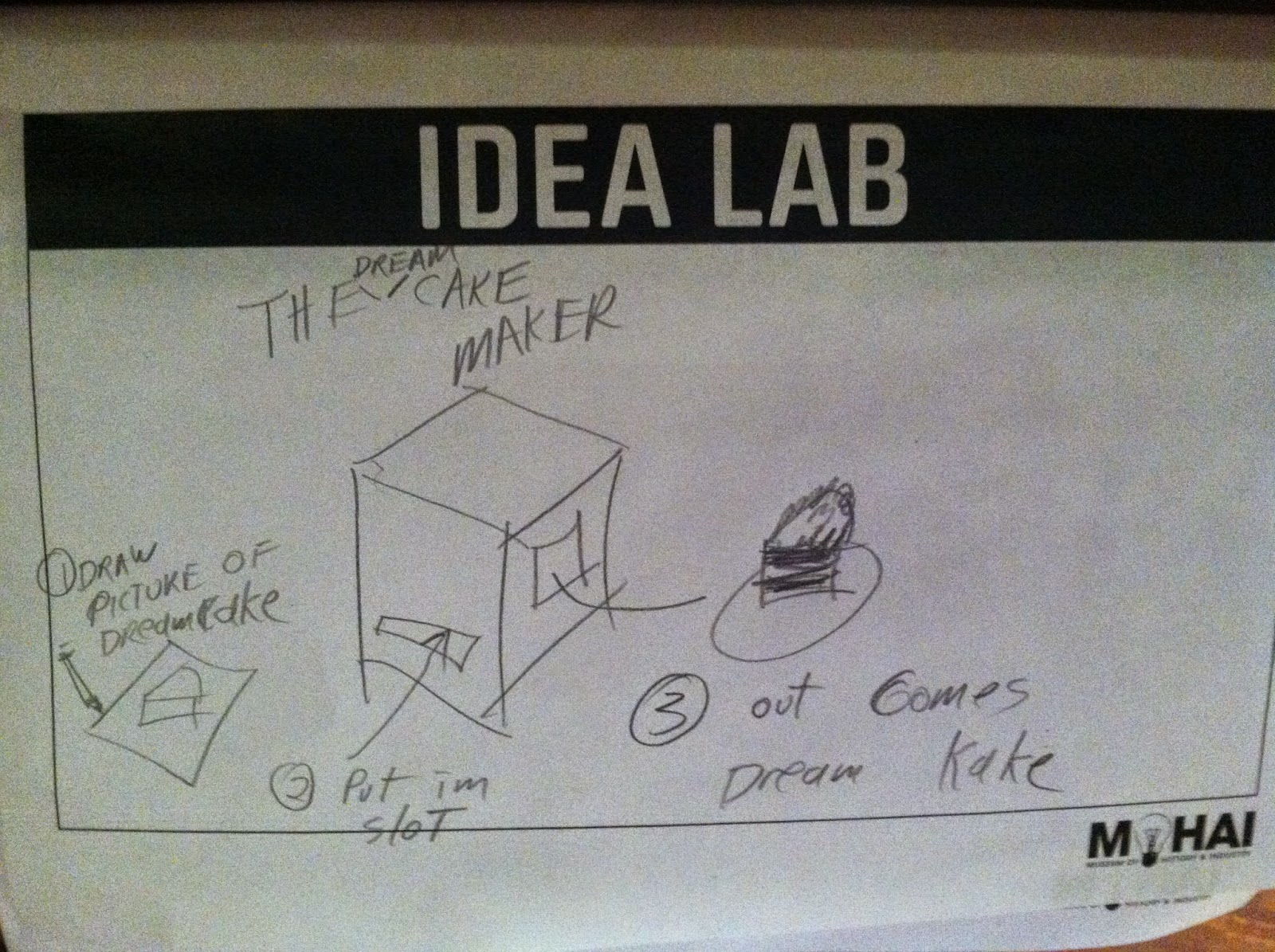 If you can't read it, it is an idea for a machine called "The Dream Cake Maker." The steps are as follows:
1) Draw picture of dream cake
2) Put in slot
3) Out comes dream cake

If this isn't proof that museums are inspiring places, I don't know what is.

On Thursday I gave a talk about fur and fashion at the Henry Art Gallery. It went well, and most importantly, no one showed up to throw red paint on me. I wasn't advocating for fur, but I wasn't trashing it either. Like most fashion topics, I think fur is really complicated, and you do a disservice when you boil it down to a single story. (I don't own any fur, but I actually got some offers from people to wear their family furs at the talk.  I politely explained that when giving lectures I usually do some hardcore sweating, so being swathed in fur seemed like poor choice. I settled for my beetle wing earrings instead.)

The week post-Seahawks loss was pretty quiet but also very productive. I resolved a really complex FIC and tried to catch up on some new accessions--which meant basking in the glory of this mega fabulous gown:


It was designed by Kiki Hart (a New York designer) and sold by John Doyle Bishop.

Over this past year I realized that I need to pull back a little and not accept every single JDB dress that gets offered. Even if someday I do an entire exhibit about him and his shop, we already have too many artifacts to display.  Before the donor sent me a picture I was about to say no, but then I saw it and was like...

It also has a matching pink chiffon cape!
Posted by ClaraBerg at 3:08 PM 1 comment: