With the wonderful American Spirits exhibition entering its final month, the second offering of my 1920s fashion lecture coming up soon, and last weekend’s Bootlegger’s Bash, it is fair to say that MOHAI is in a Jazz Age mood.

But on Wednesday this week, all that is about to change. Take cover, because the 1970s are coming.

Ok, that is a bit of an exaggeration. There won’t be any programs or lectures or Cher impersonator performances, but there will be FASHION.

Remember last year when I was all excited about the opera costumes? Well, they are still up, looking amazing. But the loan period is coming to a close, and we need to put something else in that space. I had a few ideas for other loans to get but none of them worked out. Finally I was like “well, I’m always complaining about not getting enough of our own collection out...”

That case is in the section that tells the story of Seattle from the 1970s to the present. That isn't the most robust section of the artifact collection (it isn't old enough for people to think of donating items) but we still have some cool things.  So I set to work picking three looks which would represent 1970s style, be distinct from one another, look good on mannequins, and not clash horribly.  I am pretty excited about the result.

First up, in the center spot, is this pink chiffon gown and cape made for a DIVA. 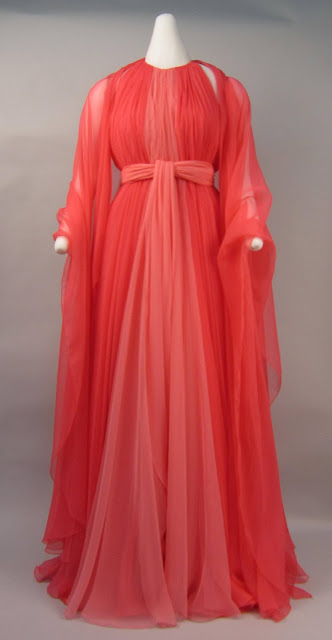 On the left will be a hippie look. This is a mix of artifacts and props. The main artifact is the bell-bottom jeans, which were worn in Seattle 1968-1980 and modified over time with hand-sewn patches. I dressed it with two things authentic to the period, but not accessioned because they don’t have Seattle stories: A fringed leather vest someone gave me, and a peasant top my mom wore in the 70s. Hanging off the leather vest is the other artifact: an alligator clip “accessory” with strips of deerskin and beads, made by the donor of the jeans. The pinchy part is a little singed so I’ll let you draw your own conclusions about that.

When I was in grad school we were warned that it can be REALLY hard to make counterculture clothes look good on mannequins. The reason being that so much of the look is the attitude of the person inside. A Dior gown is designed to be an aesthetic experience and can still really sing on a mannequin, but a pair of ripped jeans and a T-shirt that once belonged to Kurt Cobain can look pretty lifeless on a form.  So I was particularly pleased with this dressing job, because I think it has lots of visual interest and can hold its own with the gown.

And finally: Menswear. And who better to represent the color and pattern of the 70s than my dearest John?

This is a knitted wool suit with a double-breasted jacket and leather cuffs on the pants, owned and donated by JDB himself. Because I couldn’t resist, I paired it with one of his signature scarves.  I was worried it was a little too much pattern, but then remembered that he wore one of his scarves with a plaid suit when he took Schiaparelli to the Bill Blass show in '72. (Also "too much" might not have been a thing in the 70s).

So do the hustle down to MOHAI and see them in person!
Posted by ClaraBerg at 3:57 PM No comments:

Save the Ward County Historical Society!

This week, everyone was talking about the terrifying New Yorker article about how Seattle may soon be destroyed by a massive earthquake.

I’ve been hearing about “The Big One” since middle school. Seattleites know about the risk. If you are scared please move so our housing prices will go down.

But then, in the middle of the night, it was hard not to be like…

Or at work, hard not to have an existential crisis while organizing the shoe collection thinking WHAT IS EVEN THE POINT ALL OF THIS WILL BE SWALLOWED UP SOMEDAY

But I was also reminded of my visit to the Ward County Historical Society while I was in North Dakota. It is a small historical society that had survived one disaster and now was facing another.

In 2011 there was massive flooding in North Dakota including in Minot. The Ward County Historical Society was in the flood zone, and the whole thing was filled with more than five feet of water. They have multiple buildings on their grounds, some of which were two stories and others which weren’t much taller than five feet to begin with. They had enough warning to put most of the artifacts in the attics of the taller buildings, but there was serious damage on the first floor of everything. The site director who gave me the tour was thrown into her position with no professional museum training and had to figure out how to negotiate with FEMA and get the necessary repairs. It was devastating to hear some of her stories but it was also inspiring. The place was beautiful and full of interesting stuff. When you visit small historical societies, usually the worst thing you see is artifacts that look like they have been on exhibit since the Eisenhower administration. Things are coated in dust, sagging and breaking on their improper mounts, and labels are faded and worn. But between the post-flood renovations and the site director's commitment to rotating displays and putting new things out, everything looked fresh and well-maintained.

Plus, the creepiest mannequin they had was intentionally creepy, so points for that. 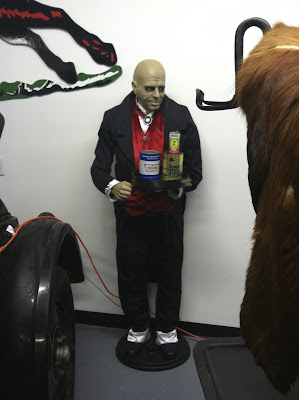 Igor just helping out at the car show

It also seemed like a pretty active historical society too—they have all kinds of events, including actual blacksmiths who make stuff in the blacksmith shop on weekends.

The scary thing though is that the society is now facing another threat. They are on the North Dakota State Fairgrounds and the Fair is trying to evict them. By one estimate it would take over $5 million to move all the buildings, assuming that all of them would actually safely make the journey. There are many in the community that are fighting to save the museum, but it isn’t clear yet if the effort will be enough. And what does the fairground want with the space? Well, they aren’t being specific, which means it very well might be used for something riveting like storage or additional parking. I was told that one of their main arguments was that the Historical Society isn’t money generating.

IT'S CALLED A NON-PROFIT

You know that prayer about accepting the things you cannot change and having the courage to change the things you can?  Museums should have disaster plans and do what they can to prepare for emergencies, but if a 9.0 earthquake rips through Seattle there isn’t going to be a lot I can do. Fault-lines and floodplains are things you and I cannot change.

In many ways, the bigger threat to museums is apathy, and it is something that we can change.  A community that cares can rebuild. FEMA doesn’t pay 100% for repairs. Ward County Historical Society got back in shape because people gave money and time and resources. But if enough people in the community don’t care about history or museums, they are going to see more benefit in a parking lot than an educational space. Apathy is the real threat that keeps museum workers up at night, and the one we work to change every day.

(If you are interested in keeping up with the Ward County Historical Society, check them out on facebook here.)

Posted by ClaraBerg at 7:41 PM No comments:

Faces I Made In North Dakota

I was planning to write a detailed recap of my trip, but it is hot in Seattle and my brain keeps melting. So here is the abbreviated gif version.

We took the train...

...although it was sad to see that Amtrak has cut back on a lot of amenities. No champagne upon departure. Plastic dishes in the dining car. Increasingly minimal food options.

Our car attendant was kind of cute, but I played it cool.

We rolled in to North Dakota just as the sun was setting. 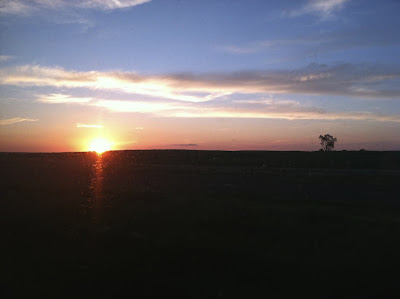 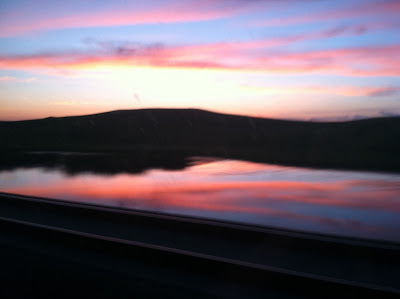 The reason for visit was to see family and attend the wedding of one of my cousins. On the day of the wedding I checked facebook and saw all the posts about the Supreme Court ruling on marriage equality.

Which made the experience of going to a straight, conservative church wedding sort of surreal.

But it was still a lovely ceremony and my cousin the bride wore a very elegant dress that was nicer than about 90% of what you see on Say Yes to the Dress.

During the reception there were lots of toasts but no alcohol.

At one point a man stood up to toast the groom, applauding him for being a good Christian man. He concluded his speech by saying, "and the world needs more people like you, because THE DARKNESS IS COMING IN THIS COUNTRY..."

Obviously it would have been a great opportunity to grab the mic and start singing the song "I believe in a thing called love" by the band The Darkness.

The rest of the trip was basically sitting in different places talking with various members of my extended family. I live in a very liberal bubble in Seattle, and most of my relatives on that side of the family are pretty conservative, but we do a good job of not pushing each others buttons and enjoying our time together. Part of the reason I went on this trip is because I like this kind of family time and connecting across our cultural bubbles.

Also, there were kittens. 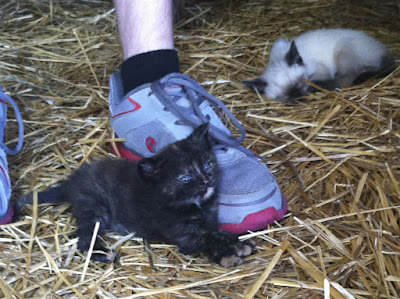 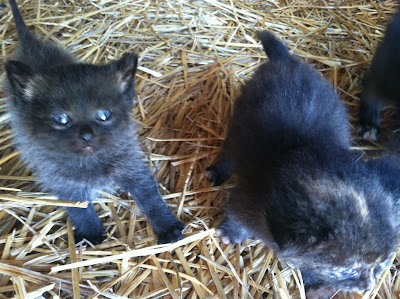 On the trip back we had the same crew and the same sleeping car attendant.

The train was delayed for heat restrictions and when Wenatchee actually caught fire we were rerouted to Portland.

Which meant that we were given extremely grim lunches and loaded on to busses home to Seattle.

When we finally made it I was happy to be home, but then it was like WHAT IS WRONG WITH SEATTLE WHY IS IT SO HOT HERE WHY DO I LIVE ON THE THIRD FLOOR WITH NO AIR CONDITIONING AND WEST FACING WINDOWS.
Posted by ClaraBerg at 10:16 PM No comments: