This week I'm giving a new lecture at MOHAI, simply titled "Seattle Fashion History." This is not a public lecture, but one of the "Insights Presentations" offered to adult groups who visit the museum.

When I was asked to prepare a talk as part of the new museum programming I was so excited. Telling the story of "Seattle Fashion History" is basically my life goal, so I viewed this as version 1.0 of a signature lecture that I would revise and improve over the years.

The presentation hasn't been quite the hot seller I was hoping for, but a group finally booked it so now I get to unleash this fledgling magnum opus on the world.

While I was working on it, I started to wonder about what this first group was expecting. How was it being messaged on their end? So I went to their website and pulled up the January events calendar. Here is the actual text of what it said:

A docent will introduce you to a part of MOHAI and then you’ll have time on your own to explore the exhibits...Trip fee includes admission and docent tour.

Crushed, I emailed my coworker who books the lectures. She investigated and confirmed that the person who booked the visit had a full understanding of what she was signing up for, but something had been lost in communication with the person who wrote the blurb. As my coworker reluctantly pointed out, sometimes people only hear "docent tour" when you describe any museum program. You can be like "The museum is having this event where you play board games and then there is a discussion about gorillas" and the person listening would still just hear "docent tour."

So basically I am going to give a lecture about clothing history to a group of totally unsuspecting people.

TIME TO LEARN ABOUT FASHION

(but please say nice things on the comment cards)
Posted by ClaraBerg at 6:11 PM No comments:

Things My Doctor Said To Me

Last week I posted that I was sick. I took a few days off, started to feel better, went to work one day, started to feel worse, and ended the week so pathetically miserable that I wasn't sleeping and it hurt to swallow water. On Thursday my parents convinced me to go to the doctor. Here are some actual interactions I had with her, interspersed with Tina Fey gifs.

Doctor: Well, your glands are definitely swollen.
Me: It hurts to swallow.
Doctor: Are you able to eat?
Me: Sort of. For lunch I had some grits with cheddar cheese, and ice cream.
Doctor: [silence] At least you are creative.

Doctor: I think there is a good chance it is mono.
Me: Ugh terrible. Any tips on how to not give it to my roommate?
Doctor: Don't lick her.

Me: I guess it could be worse. My cousin, who I might have gotten mono from, was battling it the week of her wedding. So I just keep thinking "At least I'm not getting married."
Doctor: Well, you should be glad of that for several reasons.

(I'm going to go ahead an interpret that as a feminist lady doctor diss against the institution of marriage, not some burn on me as being tragically un-marriable)

I'm feeling a lot better btw.
Posted by ClaraBerg at 7:52 PM No comments:

You know how after a break, it can feel even harder to go back to work? At the beginning of this week, I couldn't imagine making it through FIVE DAYS of work, and was already fantasizing about taking some time off. "Maybe I'll get sick?" I thought. A couple days doing nothing but drinking orange juice and watching movies? Sounds pretty good. But yesterday I woke up actually feeling sick, and realized that I am an idiot and all my ideas are terrible.

Besides the fact that being sick sucks, I actually have a lot of important stuff that I was excited to get done this week.

Most importantly, after spending all of 2013 moving the costume collection, cleaning items that were frozen, and trying to get everything organized, on Monday I was planning to finally start INVENTORY.

Last week I paced eagerly around the textile room trying to pick the perfect place to start. Perhaps quilts? No, requires too much table space. Handkerchiefs? No, that would be starting in a middle aisle in the middle of a shelf. Wait, i've got it! TIPPETS.

Wait, what are tippets again? Something to do with fur? Or some sort of glove situation? Oh, right...things that cover the shoulder and neck area but are neither scarves nor capes. I WAS SO EXCITED ABOUT THE TIPPITS.

But now, I'm sick so tippet time is going to have to wait.

The sliver lining, of course, is that I get to wallow in my misery by interspersing naps with delicious couch time. Last week I failed to mention that my cousin Laura got me the best bridesmaid gift ever: a Blu-Ray player. Husband John already had one, and so when she was packing up her house she asked if I wanted the extra. I got mega-excited. Why? Because I love high-def entertainment? No. It meant that the long, dark Northanger Abbey drought in my life was finally over.


You see, for some idiotic reason, the DVD version of Northanger Abbey was a cut version--omitting a couple scenes that made the run time too long when it was shown on US television. A couple of great scenes. So I held out and never bought it, even though it was one of my favorite Austen adaptations. But the Blu-Ray is the full version, so the moment I got home from Kansas I hopped on Amazon and bought it. New Blu-Ray player. Only one Blu-Ray to watch. Time to binge on the only Austen hero who can give Darcy a run for his money: Henry Tilney.

TILNEY SMIRKS FOR DAYS
Posted by ClaraBerg at 7:30 PM No comments:

Just after Christmas my parents and I jetted off to Kansas for my cousin Laura's wedding. Before I left, I had more than one conversation like this:

Co-worker: Doing anything fun over the holidays?
Me: I'm going to my cousin's wedding
Co-worker: Ooh, like a destination wedding?
Me: Sort of...
Co-worker: Someplace warm?
Me: Kansas?
Co-worker: Oh. [looks at me with pity]


But Kansas was actually fun times. First off, there were lots of things that you don't see in Seattle. 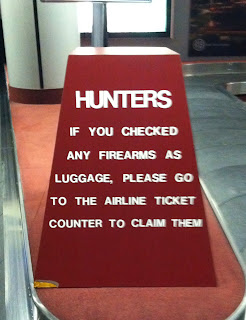 Second, the food was amazing. Things that I maybe shouldn't be eating every week, but fantastic "I'm on vacation so yes I want 'salad' that is covered in mayonnaise" comfort food. It seemed like more than half the meals were buffets, including a breakfast buffet with endless cinnamon roles, and a Sunday brunch at a retirement home which had literally 15 choices of pie. On the last night we were desperate for something a little "lighter" and ended up at Applebees. Applebees. Truth be told, part of the reason was that we were also in the mood for some alcohol, and it was Sunday in a nearly dry county and it appeared that Applebees was the only heathen spot that would serve. If you know my parents, you will be as delighted as I was to imagine them at Applebees with margaritas in hand.

You know what else was great about Kansas? The shopping. One afternoon we decided to wander around downtown Newton and found all kinds of great stuff. We walked into a thrift shop and I immediately gravitated toward this vintage purse: 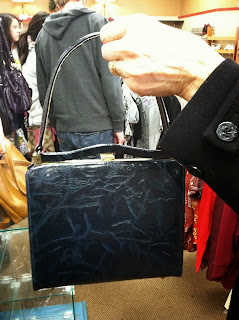 Then we went to a Christian bookstore, and I got to revel in the massive Amish romance novel section. 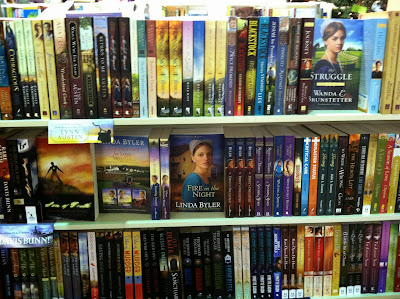 ...and snicker at the outfits on the covers of the historical novels.

We also went to The Kauffman Museum, which had a bunch of Mennonite heritage stuff. My favorite thing was this picture of two women at the Mennonite World Conference in 1967, showing how diverse Mennonite style can be... 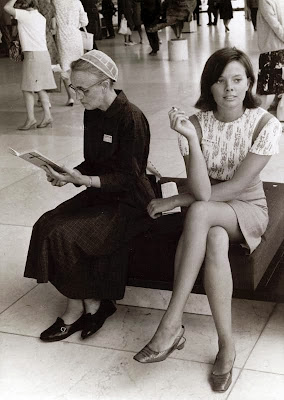 Speaking of fabulous Mennonite women, on the last day we visited my Mom's aunt Laura. Laura is my grandmother's youngest sister and stayed unmarried until she was 45. When my Mother was growing up, Laura was working at a shop in the nearest town, living in her own place, socializing with the other single ladies of Glasgow, and decorating her apartment and buying gifts for her nieces and nephews with her sweet disposable income. Today, she is a lively woman in her 80s whose apartment is still better decorated than I fear mine will ever be. She also produced the #1 best quote from the whole weekend. When asked what she was looking forward to in the new year, she thought for a moment, and then said:

"I'm looking forward to going out to eat."

I was back in Seattle in time for New Year's Eve, and attended a party where we decorated shirts with puff paint. Olivia decided to immortalize great-aunt Laura's words. 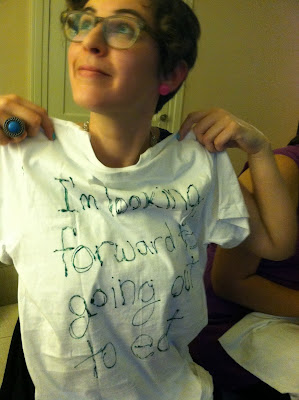 Happy New Year! May your vintage finds be cheap, and may all your gastronomic dreams come true!
Posted by ClaraBerg at 10:14 AM 1 comment: