Last weekend my John Doyle Bishop lecture at MOHAI was a big success. I'm still glowing and I feel truly lucky to have the job I have.

If you don't know me personally and have therefore escaped having me gleefully shove this in your face and require you to read it, please take a moment and read this fantastic article that was published on the Seattle-PI website: http://www.seattlepi.com/local/article/John-Doyle-Bishop-Irishman-put-Seattle-fashion-4381050.php

Now that the lecture is over, this week I felt very clear-headed and actually had some time to catch up on some important tasks. Here is a rundown of what I have been up to:

-Cleaned my work desk for the first time since moving to the new office space. Discovered a surprising number of while artifact gloves buried among the papers.

-Took Wednesday off to make up for working all day Sunday. I bleached the bathroom ceiling (that room is like a mold incubator) and listened to some Beyonce.

-Checked in with a woman who I am house/cat-sitting for in a few days. The tutorial started with the basics--"here is where we keep the cat food"-- and ended with "here is how you turn off the gas if that giant earthquake they've been warning us about happens while you are here." You know, I think it is impossible not to sound a little bit crazy and paranoid when talking about disaster preparedness. But it wasn't like she was telling me about sounds waves that the aliens are sending to destroy our happiness. A big earthquake is a legit thing and I'll be dang happy to know where the gas turn-off is if it happens. Now I can't stop thinking about earthquake preparedness. Today when I finished a gallon of milk I filled it back up with water and put it in the pantry as an emergency supply. I'm trying to think of a not-crazy way to explain it to the roommate when she notices.

-Got back to vacuuming. Spent most of Friday on a small mat made by Native man named Hwechlchtid, also known as Salmon Bay Charlie. It is a small but intricate piece and previously had some bug damage so I turned down the suction and took it slow. Listening to Bach made it a particularly calming and meditative process.

-Started plotting my next Seattle fashion project. Public Programs already suggested that maybe I make a fashion/textile lecture an annual thing. I picked this year and month because it was Bishop's 100th birthday. I have a few ideas of who to feature, but someone does have a 100th birthday in 2014. I'll give you a hint: It is my other dead gay boyfriend named John.
Posted by ClaraBerg at 2:48 PM 4 comments:

You Had Me At Flatbed Truck

The countdown to my John Doyle Bishop event has begun. Less than one week! Get your tickets now!!! 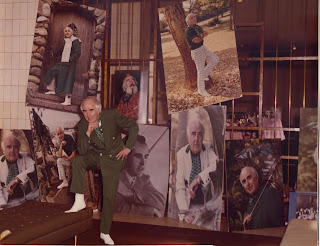 On Thursday this week I jumped out of bed remembering that there was another JDB event coming up that I said I would attend. When was it again? Oh right, the very next day.

Every year the Irish Heritage Club of Seattle paints a green stripe along the parade route the night before the St. Patrick's Day celebration. Before there was an official parade in Seattle, John Doyle Bishop would try to paint a stripe down the street in front of his store--a stunt which he was arrested for more than once. When there finally was an official parade he was the first Grand Marshal, and the green stripe is still painted every year in his honor. Since this year is Bishop's 100th birthday and I'm doing the program at MOHAI, the Irish Heritage Club encouraged me to come participate.

It started out at an Irish bar downtown by the stadiums. Of solid Russian-German heritage, I fraudulently wore green and tried to mix casually with the crowd. At the appointed hour we loaded into a flatbed truck decorated with green streamers and party store shamrocks. We rode the truck for a few blocks to the beginning of the parade route, at which about half of us got out to walk.  They fired up the green paint thing and we all strolled behind the bagpipers and the people holding the sign (officially it was the John Doyle Bishop Laying O' The Green Stripe because it isn't Irish without the liberal use of O')(also- aren't bagpipes Scottish? Someone please explain). We walked right down the middle of the street for about a mile, woo-hoo-ing at confused drivers and pedestrians.  At Westlake we stopped, painted a shamrock, and then some people did a jig. It was pretty much the most Irish thing that has ever happened to me. I invited a couple of my friends to come with and they were basically like "Do we actually get to ride on the flatbed truck? Then yes, I am coming."

Obviously the fashion side of Mr. Bishop is what has interested me the most, but his Irish heritage was really really important to him. I've held dresses from his store and suits he owned, but somehow he seemed more present for me at this event than among the rolling racks. It was just so pleasantly nutty.

Much to my delight, the Laying O' The Green Stripe got a little write-up in Seattle P-I and I was quoted.

Me and the Irish. Working together to keep Bishop's memory alive.
Posted by ClaraBerg at 9:44 PM No comments:

Where has the time gone?

My blogging has be sort of sporadic lately, hmm? My reason for slacking this week was that I only got one weekend day. I worked Saturday for "Bring Your Artifact to MOHAI Day" where the public was encouraged to bring in items for us to identify and/or provide suggestions for further research.

It was sort of sparsely attended but it was fun and provided good practice for identifying things. Our staff photographer was there and she took some shots of me. Most of them were reminders that I tend to excel at being non-photogenic, but this one I liked:

This is me trying to remember if I know anything about pearls.
Posted by ClaraBerg at 9:42 AM 1 comment:

This week I raised an army...


an army of ROLLING RACKS 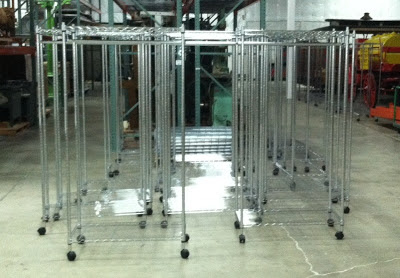 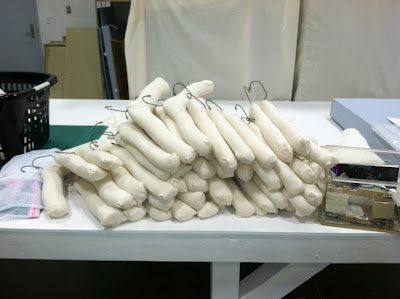 ...by harnessing the raw power of VOLUNTEER LABOR!

Yes, apparently my plan for world domination involves supporting the shoulders of historic garments and then carting them around on wheels.

-- I gained new respect this week for New Day Northwest-- the local morning cheesefest which MOHAI was featured on recently. Olivia and I have been watching the latest season of RuPaul's Drag Race and have fallen in love with Seattle-based queen Jinkx Monsoon. Apparently the same week I was helping haul the Sonics trophy to the studio, Jinkx made an appearance to promote her starring role in Hedwig and the Angry Inch. Cool stuff NDNW. I guess there is more to you than strange fashion advice and free country music CDs.

-- My upcoming John Doyle Bishop event has been getting some actual (local) press. Read about it here and here.

-- Last Sunday MOHAI had an Oscar party and I was asked to provide commentary during the red carpet pre-show. I teamed with my fantastic friend Curt to provide charming banter about the history of fashion at the Oscars. The insider sources who attended the event (my parents) said we did a good job, but more importantly we looked fabulous doing it. I wore a purple dress that I found at a church yard sale in New York, and Curt looked dapper in a suit with a tie that matched my dress. My greatest regret in life right now is that no one took a picture.

Amazingly, I found a picture on the internet that was pretty close: 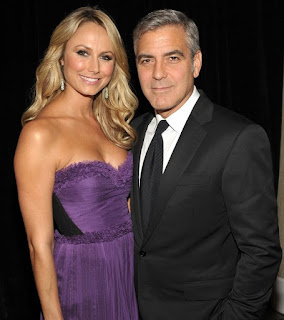 Not sure who these people are, but they are doing a pretty good job of being nearly as stunning as Curt and I.
Posted by ClaraBerg at 4:20 PM No comments: