In one week it will be Grand Opening Weekend at MOHAI. In two weeks I'll be in New Orleans for a history conference. I'm gonna be busy, so chances are the blog will be quiet for a while. But before I send you off into the new year, here are some tidbits to tide you over:

-The Miss Universe pageant happened, which means its annual parade of bizarre national costumes also happened. I would put together a commentary for you, but it would be hard to top the one available on Tom and Lorenzo. You can read the three parts here, here, and here.

-On Thursday we had an all-staff training for grand opening (aka: "Grand Opening" as it is written in all our internal emails, or "GRAND OPENING" when it is spoken). I found out that I am a "lead" in my section and will be issued a headset for which have to memorize a list of rules and information about what channel to be on for different kinds of conversations. I'm kind of stressed about it, so a few of my co-workers have offered to radio me constantly with fake code words and crises to fix.

-During Grand Opening training I found out that one of my volunteers will be the fabulous older model from the New Day Northwest segment. She was the one bringing a little white-haired fierceness next to the poor girl wearing the bow/veil "fascinator."

-For Grand Opening we are supposed to be "dressy" but should also factor in comfy shoes for standing a long time, pants or skirts with pockets, and the fact that we will all be wearing "aprons" which will be holding a kiosk's worth of MOHAI brochures and publications. I fear that is not a clothing brief that my wardrobe supports.

-On Friday we unpacked a large box of textiles, all of which have to be frozen and vacuumed before being put away. As I checked off their accession numbers I turned to one of my co-workers and said "is it weird that I'm kind of excited to vacuum all this stuff?" She said, "For you? No."

-And to conclude 2012, here is my favorite photo of myself from the artifact install process at the new MOHAI. I am in the middle of the Grand Atrium, half way up a ladder, sewing Black Bart into his shirt, and proving that skirts are no hindrance to bizarre manual tasks. 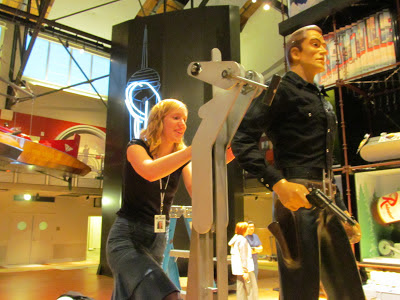 As Grand Opening for the new MOHAI approaches, I'm realizing that there are no longer "normal" work days.  It used to be that when I worked at the new building, I had a quiet desk in a room with the artifacts. But now that room has been re-claimed as the temporary exhibits space, and I spent two days last week camped out in one of the galleries. All day, I listened to a short video about the Great Depression which was on a constant loop. For a break, I went over to the 1990s grunge section where the mount makers were working on a guitar mount. The video for that gallery wasn't ready yet so it was... also playing the Great Depression video for some reason. I now know all the words to the 1930s classic, "Brother, Can You Spare a Dime?"

Today, I helped transport some artifacts to the set of a local TV show. I didn't appear on TV myself, but did get a first-hand look at the thrilling world of local morning programming. My favorite segment before ours was "One outfit three ways" which was earth-shattering information on wearing a dress with different things to make it look different. The clip is sort of long, but I find much of it deeply comical. Why?
- There is some pretty good theme music / graphics
- You get to find out about the new Blake Sheldon Christmas CD (I passed on my free copy)
- Animal print apparently counts as a neutral now
- You get to see a ridiculous "fascinator" which consists of a sparkly bow and a piece of veil
- The third "dress" styled three ways is a skirt. Did you guys know you can wear a skirt with different tops??? CRAZY.


During the segment, the Executive Director of the museum turns to me backstage and says "Sears? Kardashian collection? Hot pink blazer? Sounds like a bad idea to me." Bless you, Leonard.

Ok, so here is the MOHAI clip. The best part here is that the curator (who is a local expert but not on the museum staff) actually made use of the gloves I laid out for him and commented to the camera that he was following protocol because they were artifacts. He only managed to get one on though, and so just sort of holds the other one in a loose dangle for the rest of the segment.

Posted by ClaraBerg at 8:06 PM No comments:

This was sort of an exhausting week at work. I mean, my job is never that rough because I don't work as a miner or a greeter at Walmart--but I did spend three days watching a team of people attempt to move a 2,000 pound piece of wood. It alternated between being boring and stressful. Boring: We're going to spend these four hours just adding more straps to it. Stressful: Was that section of bark always like that? Did it shift? Are we putting too much pressure on it? Too many straps? Boring: Boy, those bolts sure do take a long time to remove! Stressful: IT'S STARTING TO ROLL! LOWER THE FORKLIFT! GET OUT OF THE WAY! (everything was fine, but we did all have a pretty serious 5 second adrenaline rush).

But if there was another theme this week other than "log move" it was "chicken wire scarf." When I was writing my thesis about John Doyle Bishop, I learned about the signature scarf that he produced with a chicken wire pattern. 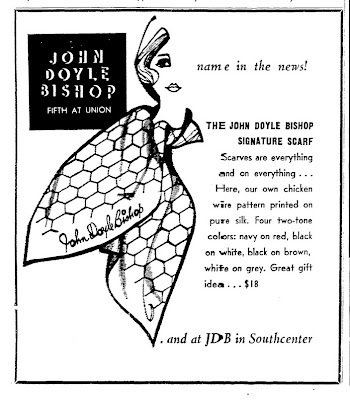 First of all, it is awesome because it is something he designed, and is a reference to his childhood growing up on a chicken farm in Idaho. This re-interpretation of a not particularly glamorous part of his history was a move that my thesis advisor called "a very Chanel thing to do". It is also cool because there are photographs of him wearing the scarf and, of course, Elsa Schiaparelli wearing one too. 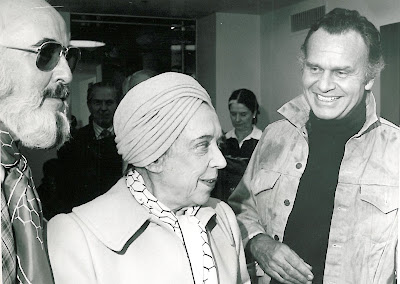 Finding a Bishop scarf has been a constant goal of mine for some time now. After months of nothing, I somehow found TWO in one week. First, a red one popped up on ebay. Then, I found a gray one at this house that I was visiting. I had gotten an email at work from a man who was cleaning out an old home owned by two sisters. He said there was a lot of vintage clothing and the museum could come take its pick (yeah, obviously I shouldn't be complaining about my job because it is awesome). Sure enough, the house was full of treasures, and I found the scarf in one of the last piles I looked through. I also found some ostrich leather shoes, a bright green 1970s Oscar de la Renta evening gown, and a so-hideous-its-awesome 1990s corduroy ensemble from Eddie Bauer.

On Tuesday I won the ebay auction (I was the only one who bid) and it arrived in the mail yesterday. The scarf from the house visit has to go straight to the museum, but ebay one is mine! I'm excited to wear it, but I'm discovering that a big red scarf is kind of a hard thing to pull off. 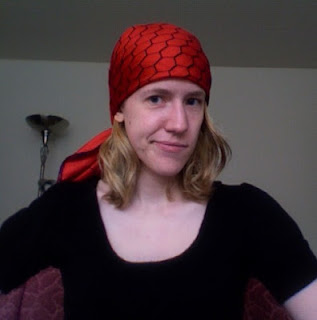 Here I'm either a pirate or Rhoda from Mary Tyler Moore 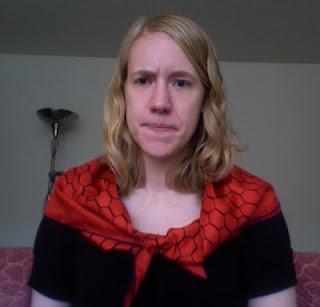 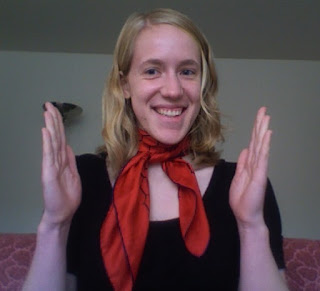 "Your nearest exit may be behind you!" 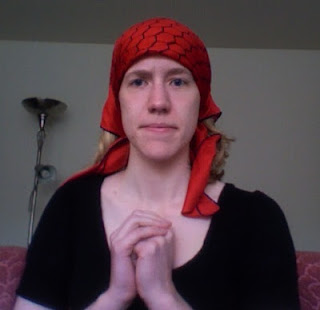 "Life on this collective farm is very difficult" 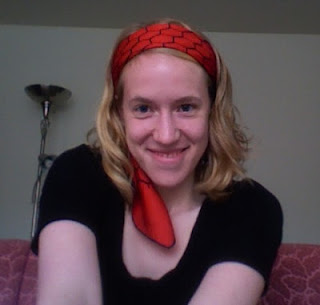 "Gosh, do you think Bobby will be at the sock-hop tonight?" 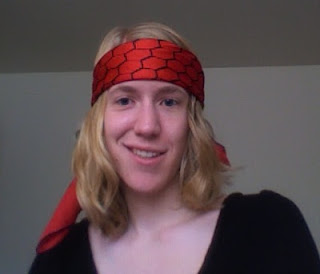 Here are some weird work-related things I've been up to:

-We recently acquired one of the original driving consoles from the Seattle Monorail. It is a pretty cool artifact, which you can sort of see in this picture here. Basically it is an L-shaped metal thing with a bunch of dials and knobs and a chair. I was charged with cleaning it. My method of choice? Q-tips and a jar of mild metal cleaner--wielded while crouching on the floor and trying to keep my skirt in some sort of modest configuration over my legs.

-Another new accession was a 1930s doll that was purchased from a Seattle toy store. As I started cataloging it I realized that I was going to have to put a number on every single piece of clothing she had, no matter how tiny. Hard objects (plastic, metal, wood etc.) usually get printed numbers that are adhered with a removable resin, and those numbers can be made quite small. Fabric usually gets numbers written out on twill tape and sewn in--but the twill tape we use is pretty bulky. These clothes were so small and delicate I needed another solution. So I wrote numbers on Tyvek as small as I could and then sewed it down on one side. It turned out pretty well

And before anyone gets up in arms about the fact that I am touching the object with my hands: Clean hands are actually recommended instead of gloves when doing something that requires a lot of dexterity--like trying to make tiny, tiny stitches.

-Do you remember Black Bart? Well, he is out of his crate and ready for action! On Friday I had to hang out with him while the mount makers prepared his mechanized mount. Unlike other projects though, which are done in the privacy of our artifact staging room, this was happening in the center of the grand atrium. So as people came into work and donors passed by for tours, I was there authoritatively guarding a shirtless man in tight pants, lying flat on his back on a table. Then, when we lifted him up to test the mount, I noticed a bunch of scratches so I dutifully took a picture to document the issue: 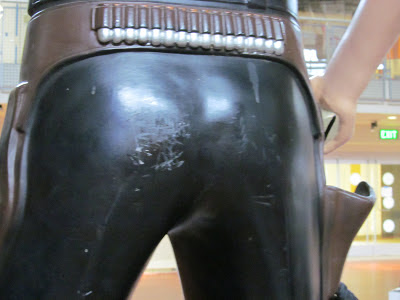