Hey, remember last August when I volunteered for Antiques Roadshow? And then wrote a book-length post about it? If you don't, I'll wait while you relive that.

Ok, welcome back. Well, the Seattle episodes have finally started airing with the last episode due tomorrow night. Watching it has been this fun game of trying find me in the background, and reliving my memories of the textile experts that worked at my table. Episode 1 featured the rug guy from my table (with a woman who was one of the first people through the line) and Episode 2 had the Chanel coat and the guy who pulled me aside to ask about John Eaton. That means tomorrow night's episode should include the third appraiser from the textile table, talking to the two ladies who came dressed in period costumes that they made themselves. Adorable.

When I watched Episode 1, I missed the first few minutes, but spotted myself in the background of a discussion about a beaded tea cozy. Awesome! Then the next morning I had two people say to me "Hey, did I see you on Antiques Roadshow last night?" What? Were they that eagle-eyed? No, turns out that during those first few minutes that I missed, I had a starring role walking awkwardly into the shot while host Mark Walberg does an introduction.

Here is the full episode, but you only have to watch the first minute or so. The awkwardness starts right as he is talking about Jimi Hendrix.

Please, someone gif that for me!
---------
Edited to add: I just watched and the ladies in period costume weren't on! How disappointing.
Posted by ClaraBerg at 8:18 PM No comments:

Textiles are particularly susceptible to damage from light and some can become weak from holding their own weight on a form for long periods of time (they weren't built to be on a body 24-7 for months on end). It is therefore a general museum standard that textile pieces should not be on permanent display, and instead be rotated out every 3-6 months.

Dressing the mannequins for the new museum was a big part of my job last year, and so I think I'm sort of in denial that I'm going to be doing it all over again in just a few short weeks, squeaking it in in the middle of everything else.

But I've actually rotated one item out already: the 1920s evening dress. I decided to put it on a 3 month rotation because evening dresses from that period are notorious for falling apart while on display. They tend to be made of light fabric and then beaded heavily, so you can imagine why that quickly turns in to a conservation nightmare.

Anyway, let me take you on a magical, blurry iPhone photo journey through that process. 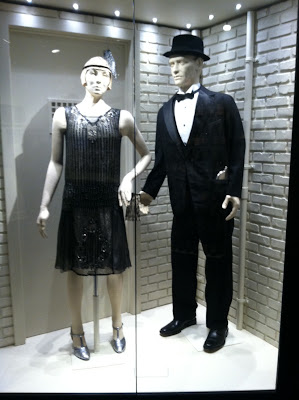 Ok, so here is how our speakeasy-sneaking couple looked at Grand Opening. I'm not going to deny that these mannequins are kind of weird looking. She has swimmer shoulders, and he can't stand up straight and so looks like he either shuffles around with back pain or is leaning down to slap her ass. Good times. Also, longtime readers may remember him and this same creepo. 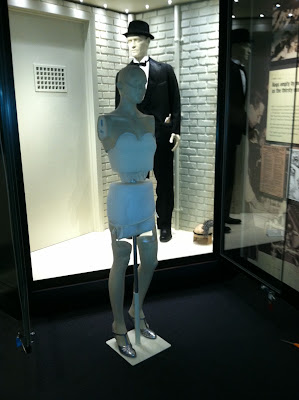 Here is what our lady looks like when undressed, unwigged, and de-armed. I think she looks kind of cool this way, like some sort of robot with fab shoes. 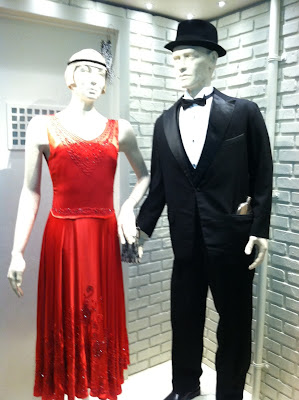 Re-dressing this mannequin actually took two attempts. I have some extra mannequins, so for most of the costumes we can do the dressing off site and then just bring the new one to replace the old. But we only have one 1920s lady with the torso and the legs. So I have to bring a dress and do all the work on-site while the museum is closed.

This photo is of the first attempt at re-dressing. We put this red dress on and then realized that it was a bad choice. It was gorgeous and eye-catching but the fit was way too tight and the fabric was much weaker than I realized. If we left this thing on display it was only going to get weaker and would probably start ripping. I took this photo before we reluctantly removed the dress from the mannequin, so the public never got to see it. 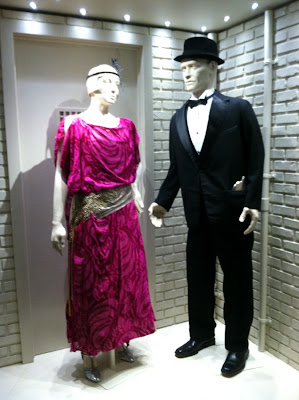 A couple weeks later I came back with two options (in the meantime we put the dress from Grand Opening back on because it was actually holding up quite well). This one won both categories of the competition: fit and strength. It is an early 1920s pink figured velvet dress that is basically made of two big drapey rectangles held together at the top. Extra bonus: the cut of the dress hides her man-shoulders.

I Want All The Shoes

Sometimes I fantasize about buying clothing exclusively from Seattle-based stores and companies. (A book about my fantasies would probably not sell as well as Fifty Shades of Grey). It would be eccentric, and half the point would be letting everyone know so I would insufferably bring it up in conversation all the time, but I think it would be pretty awesome. I could go to Filson for outerwear, Eddie Bauer for basics, Nordstrom for dresses and shoes, and Tommy Bahama for...swim cover ups? Not to mention all the local boutiques and small companies headquartered here. I'd probably be out a lot of money, but it would be fabulous.

And now, I have yet another reason to go forward with the plan. It's called Hourglass Footwear:

Hourglass Footwear makes hand painted shoes in all kinds of fun patterns. This week I went to a fashion show at the Women's University Club featuring local brands and vintage pieces. It was basically an afternoon of all of Clara's favorite things.  Most of the looks were paired with shoes from Hourglass and I totally fell in love. You can read their own blog post about the event here.

And guess who was just sighted wearing a pair of Hourglass's shoes?

Jinkx Monsoon, Seattle's own drag superstar who this week WON RuPaul's Drag Race (Portland may have three Project Runway winners but now that we have a RPDR winner I think we are even). At the (surprisingly dull) Drag Race finale, Jinkx debuted an outfit decorated with butterflies, complete with matching shoes. 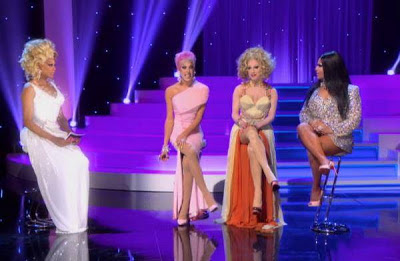 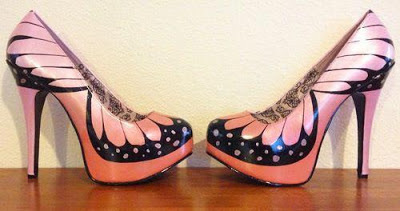 I just wrote your new advertising slogan Hourglass Footwear. You're welcome.
Posted by ClaraBerg at 8:49 AM No comments:

Tolo: The Coolest Regional Word Ever 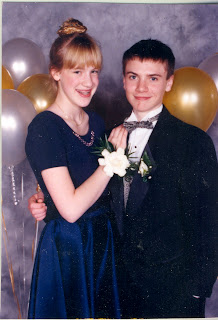 This week I took a donation at the museum of a dress that was worn to a school dance in the 1950s. It had three cool stories attached to it. 1) The owner bought it at local department store Frederick & Nelson, and it was a big deal because it was the first thing that her parents allowed her to buy on her own and charge to their account. 2) Her Catholic school had modesty rules about dresses, so her mother had to add a strap around the shoulders to pass the censors and 3) She wore it to Tolo.

If you were not raised in Seattle, you are probably thinking "What on earth is TOLO?" and if you were, you are thinking "Doesn't everyone call it that?"

Tolo is a dance where the girls ask the guys, and it is a regional word in the truest sense. People from here don't know it by any other name, and it draws blanks stares from just about everyone else. The reach of its usage extends only to Western and Central Washington-- apparently not making it to Oregon or B.C. or even to the far East side of the state. But within it's area it is totally pervasive. When I was growing up, absolutely every single school called it that and when I got to college in Indiana I was shocked to find out it wasn't called that everywhere. My Seattle transplant parents had talked about "Sadie Hawkins" but I just assumed that was an outdated term from an older generation.

It turns out "Tolo" is a word from the Pacific Northwest trade language Chinook Jargon. It was used among Native tribes centuries before the arrival of Europeans, and then added French and English words once those groups showed up. Up until the early 20th century the language was still very much in use by people from all parts of Seattle society, with even the wealthy elite bragging about their knowledge of Chinook Jargon as proof that they were "real" Seattleites.


"Tolo" means "to win" or in some contexts "to take control." At the turn of the 20th century there was a women's organization at the University of Washington called the "Tolo Society" that sometimes organized events and dances. It is thought that that is how the term came into use for a girls-ask-guys dance.

If you want to know more about Chinook Jargon (and join me in bringing back fun words like "skookum" and "iktus" into everyday speech) wikipedia has a pretty good page on the subject, and you can find some of the info on Tolo on this discussion board here. MOHAI also has a really cool interactive feature about the language in our core exhibit at the new museum.

And yes, all the included pictures are of yours truly attending Tolo in high school.
Posted by ClaraBerg at 3:35 PM No comments: