Exhibit Ideas To Bring In The Crowds

This week Future Beauty: 30 Years of Japanese Fashion opened at the Seattle Art Museum and obviously I was super excited about it.  Not only is a world-class fashion museum (the Kyoto Costume Institute) bringing stunning, aesthetically thought-provoking clothing to to my fair city, but it also marks an important milestone for the Seattle Art Museum. It is, in fact, the first foray into fashion for SAM. They've shown some "costume art" in the past (Nick Cave) and their non-Western art collections include wearable pieces like kimonos and masks, but this is the first time they have willingly and openly embraced fashion as something worthy of being in an art museum.

Historically, the study of clothing was considered pretty low on the art historical hierarchy. To my knowledge SAM doesn't have a fashion collection and never has. Instead, the grand ladies of Seattle donated their wardrobes to MOHAI and the Henry Art Gallery. But lately fashion exhibitions have proven to be quite lucrative for museums--drawing big crowds and engaging previously untapped visitors. So I'm guessing that is at least one factor in SAM's decision to host this show, and I'm hopeful it will be successful and encourage them to do more.

When choosing exhibition topics, museums have to consider a number of factors. What is the public interested in? What might push the envelope and inspire debate? What is financially viable given our current budget? What topics are being neglected that should be addressed? But back in the MOHAI collections office, we have a running joke about exhibition topics based on one factor: What do we have a lot of in the collection? Here are some blockbuster ideas we have been hatching. 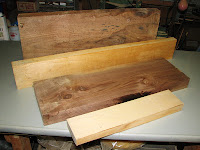 Pieces of Wood
This thrilling exhibition will explore the many important chunks of wood in MOHAI's collection including: boardwalk planks, pilings, cabin bits, unidentified furniture parts, and that one box with all those little wood chips we have for some reason. Not to be missed. 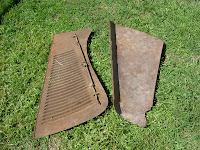 Pieces of Metal
The follow-up to last year's must-see Pieces of Wood, Pieces of Metal will feature such permanent-collection highlights as: coils of copper wiring, buckets and pails, parts of tools, and wrought iron things that are probably from some building but everyone forgot which one. 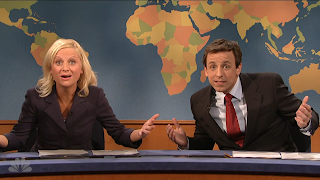 ...Really?!
Inspired by the popular SNL segment "...Really?! With Seth and Amy," we explore some of the most puzzling items that were ever donated to and accepted by the museum. Star objects include:

Moldy Confederate Uniform
This uniform was used by donor's father in Mississippi and then transported to Washington in a waterlogged trunk in 1911. Currently home to 15 different kinds of mold. Curator at the time made note that "it might need some conservation" and then shoved it in a plastic garbage bag and forgot about it.

Collection of Glass Punch Cups
From one prolific collector, this staggering collection of 923 punch glasses is possibly the largest in the world. The collector neglected to make any notations about where or when any of the cups were made and if they were ever used for anything special, but gosh, it sure is an impressive number of little glass cups.

Cast Iron Statue From Milwaukee
Massive, difficult to move, and with no known connection to Seattle history, this statue cuts an impressive figure in the exhibition space. Appearing to be some sort of heroic soldier holding a box or something, this statue entered the collection at a time when the museum just put random stuff on display and the curators enjoyed the idea of saddling their successors with logistical nightmares. Since the moving company quit in disgust after installing this piece, it will now be a permanent fixture in the temporary exhibition space.

(Okay so I made those artifacts up, but they aren't that far off from some nightmares we actually have in the collection)

And now that we've been moving the entire furniture collection, we've come up with a new one. Although it is less of an exhibit and more like a haunted house for collections managers and registrars. 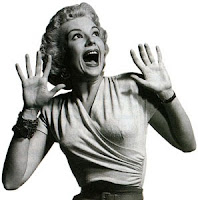 ...It Came Around the Horn
What's that giant armoire lurking in the corner? What about that cheap-looking sideboard clogging up the aisle? Can they be proposed for deaccession? No! Do they have any sort of story? Yes! They came around the horn. No matter where they were made, no matter how giant or commonplace or depressing to look at, someone, at some point, hauled its sorry ass thousands of miles by sea. Why? We will never know. But they did. So now we have to keep it.

I feel like every other week I'm apologizing for being behind on blogging. I also really want to do a post about Howard Blair, but I haven't had a chance yet to go through the recordings of the interview I did. I could launch into a complaint about how busy I am, but that would be a bit of an exaggeration. It's not like I'm raising children, working multiple jobs, or writing a dissertation. I just have a weekend routine when it comes to blogging and when it gets disrupted I have a hard time bouncing back. So here are some of the oh-so-important things that have been putting me off my blogging groove.

1. I housesat for some people for a week and forgot what they told me about accessing the wireless network. Watched TV instead.

3. And then I found out (in the form of a gift from my mother) that someone wrote an academic book about the Amish romance novel phenomenon.

It has the pun-errific title The Thrill of the Chaste and it is so good. If you need a primer on my fascination with the genre, you can read my previous posts here and here.

4. My cousin graduated from Seattle University and his family came out from Boston to celebrate. For such a long time I thought of Ben as this little kid running around at the family reunions but now he is this mega-tall, deep voiced 20-something who is using his film-studies degree to make music videos for aspiring rap stars. Seriously. The facebook page for his production company (Altrac productions- for all the hardcore underground Seattle musicians reading this blog) says their mission is "To film some raw shit."

But actually, if you click on that link and watch some of the videos, they are quite impressive. Beautifully filmed and edited so that some of that shit doesn't actually look so raw after all.

Also impressive? I really wasn't lying about him being mega-tall.

To give a point of reference-- his older brother Peter (far right) is not Tom Cruise-sized but is, in fact, over six feet tall.

5. The Northwest Girlchoir is celebrating it's 40th anniversary this year and asked alums to come back and sing for their end of the year concert. It was a lot of fun, but when the former director went to the mic to talk about how proud she was to see the organization thriving and how the alums are living proof of the choir's ability to build character and create strong, confident women...she started to get choked up which was just the beginning of a chain reaction.

And then we had to pull it together and still sing.

So, in summary, haven't been blogging because I got held up by: trashy reality TV, poppy seeds, Amish people, redheads, feelings.

Sorry.
Posted by ClaraBerg at 9:18 AM No comments:

So I'm a little behind on blogging, and today isn't going to be a long post either. But I've got some exciting things coming up. Two weekends ago I got the chance to interview an amazing Seattle fashion legend named Howard Blair. He was a designer who worked out of his home and made primarily wedding dresses and special occasion gowns for all kinds of fabulous women in this city. He talked to me for hours (which I recorded) and showed me some of his creations, so I'll probably have a couple posts about that coming up.

My birthday is also coming up, and it is my last in my twenties. Right now I'm going back and forth between being like, "Whatevs, being 30 next year is no big deal and still totally young," and "Augh so OOOOLLLLLLDDDDD." But I think this is normal. It is always exciting and scary to stare into the future and wonder what things will be like. In 1962 the Seattle Times asked Howard Blair to sketch something that he thought that women would wear living on the moon in the 21st century. Here is what he came up with: 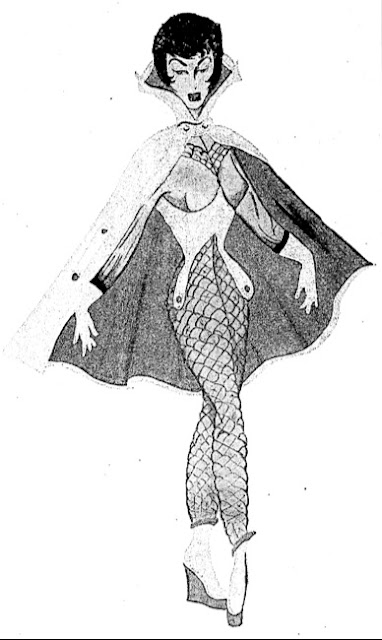 The copy reads, "Howard Blair, Seattle designer, sketched this costume as his idea of what the well-dressed woman would wear in the year 2000. The pressurized quilted pants have an inner lining that controls temperatures. Seventy-five pound weights in the heel of each shoe will keep her feet on the ground. The cape is of blue velvet and leather."

Wow. That look is FIERCE. So next time, dear readers, you find yourself feeling apprehensive about what is to come, just think of Howard Blair. He looked into the future and saw superhero fabulousness. We should too.