Period Shows I Bailed On

As you can see, I have been making my way pretty quickly through the historical movies and tv options on Netflix, Hulu, and Amazon. I'm always craving that new show that I will fall in love with, which means I have taken a chance on some things that ended up not being my jam. Here is a recap: 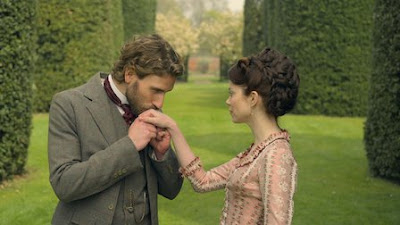 The previews and promo images for this show include women in bustles which made me think I would like it. Also: Old-timey sports fashion! Class conflict! What looks like the same mill where North & South was shot! It is about football (I think the "soccer" kind of football but not 100% sure) but I stupidly was like "maybe there won't be so much of that." 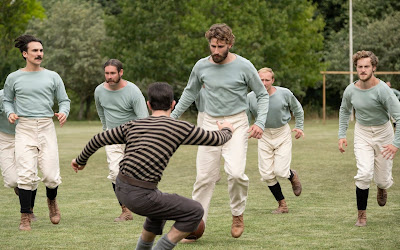 I made it to the first game (match?) and remembered something about sports-focused movies/tv. They aren't just going to talk about the sport and do some sports things briefly. The whole show will hinge on long game scenes in which each play is important and you have to focus because some detail of what happened will shape the characters and their motivations I was just like...

Less sportsball. More bustles. Or maybe change the sport to something women can play while wearing bustles? I guess what I really want is an extended version of the archery scene in Daniel Deronda. 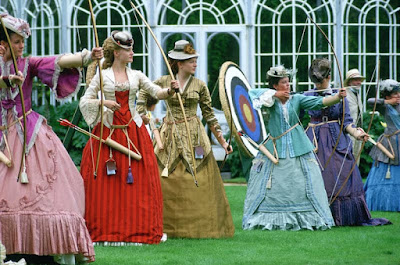 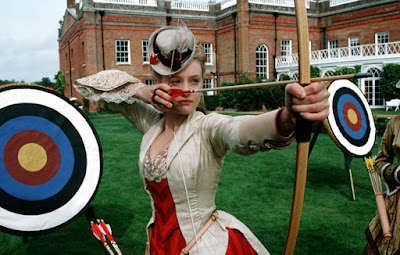 YEP, THIS IS IT I keep seeing this on the list of historical shows on Netflix (yes, the Netflix algorithm gives me a "historical TV shows" category) and finally I gave it a shot.

But here are some things I don't like, which I probably should have guessed would have been part of a story about spies during the American Revolution.

So SHOCKINGLY I didn't enjoy it and gave up. But the biggest insult was that J. J. Field's character had a wig with these awful little white rat-tail braids. 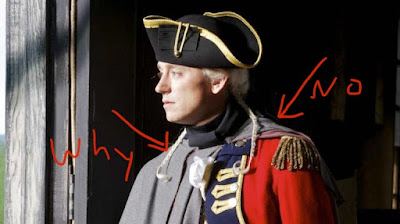 Is there a way to make a show with a bunch of military uniforms that isn't like, about a war? Or about the British army but somehow not be super problematic and colonialist? Maybe a show where J. J. Field's character clips off the braids and goes around the country saying nice things to ladies in that Alan Rickman deep voice he has?

Maybe he can talk about muslin 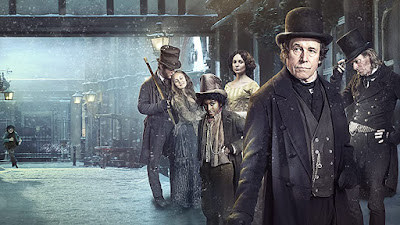 Ok, my bad on the other shows, but this one really should have been up my alley. Dickensian takes a bunch of characters from Charles Dickens books and puts them together for a new story. I mean, I seem like the exact target demographic for that.

I gave this a two-episode try, but finally had to admit that I wasn't enjoying it all and didn't look forward to anything about how it would unfold. The main problem was that it was a prequel to the action of the books where all these characters appear. In the first episode there was this young woman named Amelia whose father had died, and she seemed like she was going to be one of the lead characters. Only near the end of the first episode do we learn her last name: Havisham. 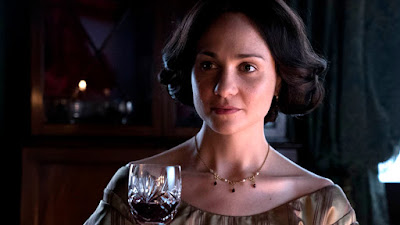 I know that origin stories are hot these days, but it does take some of the suspense out of it. This gal is going to fall in love and it isn't going to go great. 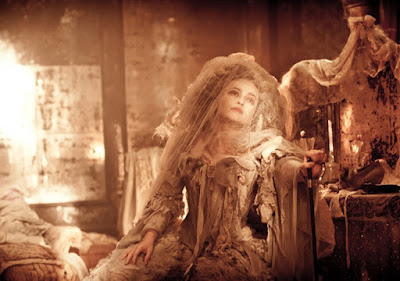 But it will be Goth AF

The same goes for the other leading lady. Her name was less familiar, but some internet searching and I realized she was the future Lady Deadlock from Bleak House. Ah ok. So I now know exactly how her story will play out.

She ends up very happy and fulfilled

The inevitability just seemed to take all the fun out of it. Plus, there wasn't much fun to be had in the first place. The show interpreted "Dickensian" to mean "dark and gritty" without much joy and humor also found in his stories. Watching the rest of the episodes seemed like a slog.

Why do a prequel? Why not connect all these characters after the main action of their stories and have them all go in surprising and unexpected directions? You could start where Our Mutual Friend leaves off (the final completed novel) with the enigmatic Mortimer Lightwood walking off into the night. Mortimer spends most of Our Mutual Friend being detached and sardonic, but he is also shown to be compassionate and kindhearted. He is observant, critical of the follies of London society, unmarried, and you can reasonably interpret him as gay or bi. Wouldn't he be an interesting character to follow into a new story? 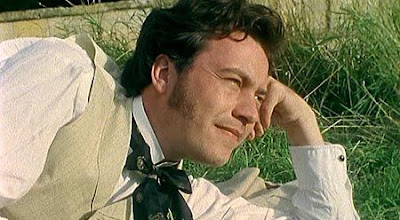 For the record this is a legitimately good idea.
Posted by ClaraBerg at 1:00 PM No comments:

Martin Chuzzlewit Still Got It 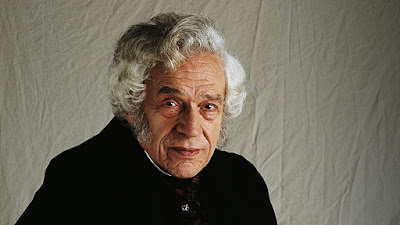 I've written before about how much the 1995 Pride and Prejudice basically changed my life, but the reason I even saw it in the first place was because my parents and I were already in the habit of watching Masterpiece Theater-type miniseries together. Martin Chuzzlewit came out the year before P&P and while it didn't become an obsession, I remember enjoying it. 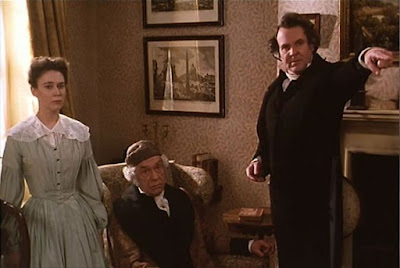 Having seen it over 25 years ago, it was amazing how much I remembered. It has many unforgettable characters and scenes. A decade later Andrew Davies is credited with livening up Dickens by making Bleak House (2005) with a lot of quick cuts and cliffhangers. This was widely applauded and he brought a similar style to Little Dorrit (2008). But for me, the combination of Dickens' ridiculous characters with everything being over-dramatized and fast paced just felt like...a lot. Too much. Martin Chuzzlewit has a slower, smoother pace, which allows the actors to really go for it without becoming grating or exhausting. The exceptional acting carries the story. 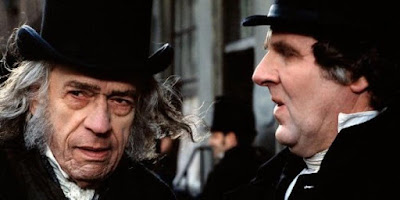 Martin Chuzzlewit is the name of both an old man and his young grandson, although neither feels like the main character of the story. The real main character is Seth Pecksniff, a completely amoral man who wraps up all his plotting in a veneer of goodness and gentility. He is played to perfection by Tom Wilkinson. 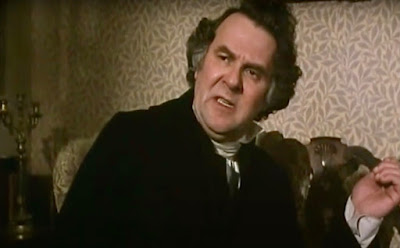 Pecksniff is dastardly at times (there is a particularly upsetting scene when he physically grabs a woman who he wants to marry and won't let her go) but most of the time he is comedic. Everything he does is done with 10 layers of obsequious posturing. 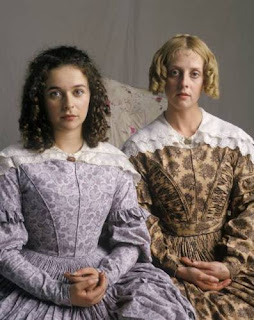 Pecksniff has two daughters: Charity and Mercy, or "Cherry" and "Merry" because Pecksniff is that kind of cheeseball. Emma Chambers plays older sister Charity, who at first she seems to be the perfect picture of sweet, feminine docility. It falls apart though when a man she thought was about to propose to her, proposes instead to Mercy. She bursts into a screaming rage and it is funny and cathartic all at once. 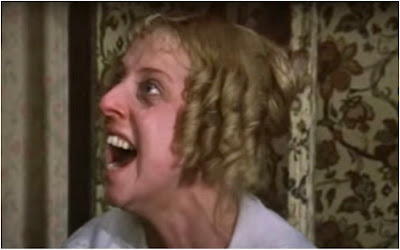 Let it out girl

For the rest of the story she asserts herself more and tries to take charge of her life. Some of the choices are more "Oh honey no" than "Yaas Queen" but she is consistently interesting and entertaining. 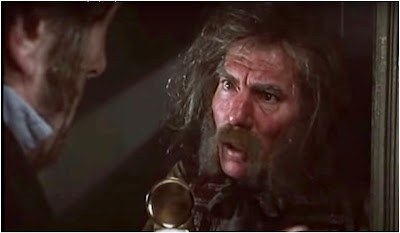 Pete Postlethwaite is AMAZING as a character who is basically two characters. Montague Tigg starts the story as a poor, rough-looking opportunist. Eventually he finds the right opportunity and transforms himself into the stylish Tigg Montague. As one character remarks, even his own mother might have trouble recognizing him. 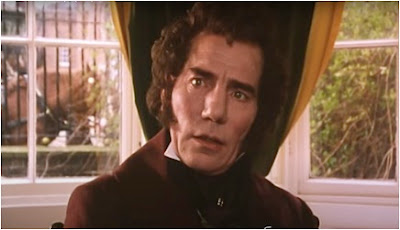 Other standouts include Paul Scofield as both older Martin Chuzzlewit and his twin brother Anthony, and the exceptional Elizabeth Spriggs as Mrs. Gamp. 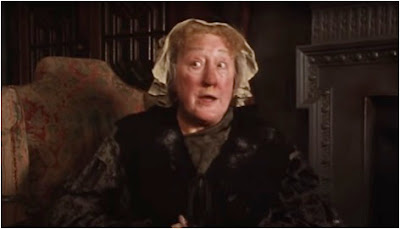 Couldn't understand half of what she said but still into it 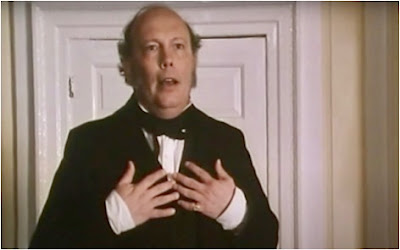 This being Dickens, there has to be some darkness and gloom. In addition to Pecksniff assaulting Mary Graham, there is a major storyline about an abusive marriage which is really painful to watch. 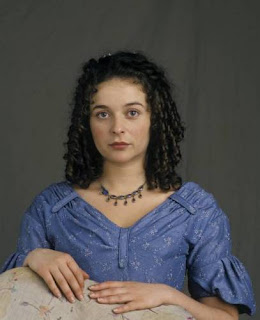 On a less serious note, the other upsetting thing about this miniseries is that this character is supposed to be the same age as me: 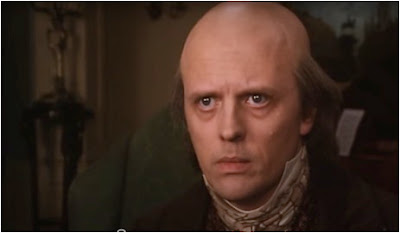 One interesting thing about Martin Chuzzlewit is that it was written in 1843 just after Dickens visited the United States for the first time. He wrote a travelogue which critiqued quite a bit about American society, including slavery and our dangerous love of capitalism and how we idolize successful businessmen. In Martin Chuzzlewit, young Martin goes to the US to try to make his fortune, and is swindled into buying land in a remote swamp were everyone is dying of a fever. Slavery isn't mentioned, but it still paints a pretty unfavorable picture of our country. You know what else paints an unfavorable picture of our country? Our still very current problems of racism, capitalism, and rampant illness!

I won't go so far as to call Martin Chuzzlewit prescient. It is a very white, old-timey story about 1840s England. But if you are wanting a break from current events, but still want your entertainment with a whiff of anti-American sentiment, Martin Chuzzlewit isn't a bad bet.
Posted by ClaraBerg at 7:04 PM No comments: