And Now...Here Are Some Can-Can Dancers

Woo boy. This week. Right? If you can forgive the liberal use of expletives, doesn't this pretty much sum up what we are all feeling? (Thank you fellow Northwest Girlchoir alum Lindy West)

But work-wise it was a pretty good week for me. I had several appointments with people wanting to donate artifacts and tell me their stories, and every one of them was a delight. Two who came in were there about John Doyle Bishop, so I got to hear tales of him dressing society weddings and sweeping around the Washington Athletic Club in a cape and gloves. But it was hard to top Tuesday, which was when I had two women who had just turned 70 come in and tell me about their careers as "Barclay Girls." 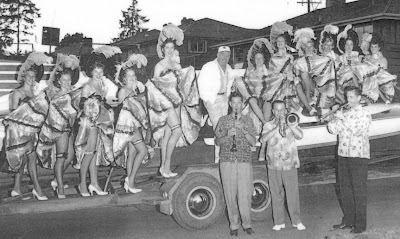 The Barclay Dance Studio had been around in Seattle for a while, but the "Barclay Girls" troupe became famous in the early 1950s when they started putting on shows for troops returning from the Korean War. Every time a ship docked in Seattle, the Barclay Girls were there. Rain or shine, doing a kick-line on the pier in fishnets and heels.

After the conflict ended they were mainly known for their performances at Seafair. Each year had a different theme and they would dazzle the crowd with various musical numbers and quick costume changes. And they weren't just shimmying and lifting their skirts: they were talented, versatile performers trained in multiple styles of dance. 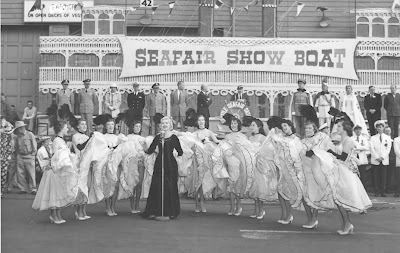 The girls were quite young-- usually in high school or early college. Sometimes they would have to get dressed up and greet a ship early in the morning before school, and the two I met talked about getting a special ok from their teachers to sew sequins on their costumes during class. Wherever they performed they always had a chaperone with them (usually one of the girls' mothers), so while they may have gotten lots of hoots and hollers, watchful eyes kept anything more questionable from happening.

Ok, so there are some icky gender roles going on here with the men fighting a war and the women putting on a saucy show, but I'm going to lay that aside for a moment. Regardless of your gender or theirs, wouldn't you enjoy seeing a bunch of talented people in sparkly costumes put on a dance extravaganza? Isn't a cheerful kick-line just what we need during a week that has been as confusing and upsetting as this one? It doesn't fix anything, but it is a reminder that as dark as this world can be, it can also be full of feathers and ruffles and fun.
Posted by ClaraBerg at 10:28 AM No comments:

Early on in the process of moving textiles out of our old warehouse we found this scarf in a bright, neon color of pink. I mean this thing was like eye-searing pink. It actually kind of hurt to look at it. It said it had been worn for "Operation Deep Freeze" which apparently is the code name for U.S. missions/operations in Antarctica. In other words: dudes in Antarctica were issued clothing so pink that it just might save their lives if they got lost. One can only assume that their official motto is "Safer Living Through Fabulousness." 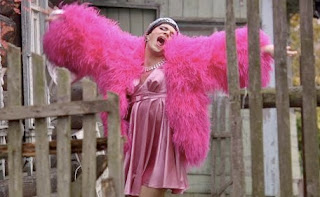 "Come find me in the snooooooowwwww!"


Soon after that discovery, "Operation Deep Freeze" became a fitting name for a mission I embarked on myself. While we were packing things at the old warehouse we started discovering various kinds of bug evidence. Just this week I sent these pictures to a couple of my coworkers. The response came back "Maybe you should change your blog title to 'Ways I grossed out my colleagues today'." 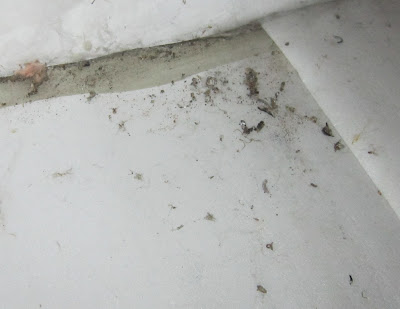 This is what the floor looked like when we moved some hanging garments.
Lots of spider bits and what looks like moth cocoons 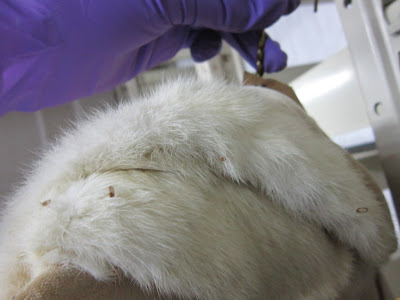 A horror on par with Snakes on a Plane: Bugs on a Collar
(luckily these were dead)


This is bad news for a textile collection. So we decided to send batches of stuff to get frozen. Just as vacuuming is a minimally invasive way to clean, freezing is the preferred pest-stoppage method over harmful chemicals. Fortunately, we have a friendly relationship with a cold storage facility so we are able to freeze entire rolling racks and pieces of furniture at once.

Now that the first big batch is back from the freezer, the next step is to check and vacuum everything before putting it away. It is taking a long time, but if we skip this step, we might find a dead bug or a moth hole in the future and have no way of knowing if it was leftover from the old warehouse or is something new. So we are going through each item, vacuuming out any dust or bug carcasses, and making notes of any existing holes.

The fun part is that sometimes we discover other weird or exciting stuff in the garments. Last week we found documents and photographs in the pocket of a coat that belonged to a politician. This week we cleaned a hunting jacket that had feathers all over the inside one of the interior pockets (it was not a down coat). Is that a thing? When you hunt birds do you just jam the dead ones into your pocket?

One thing that I love about my job is the variety of tasks. When people ask what I did today I can say things like, "Well, I answered emails and then spent some time plucking feathers out of a hunting coat."

Posted by ClaraBerg at 4:08 PM No comments:

April 1st was a pretty exciting day for the collections staff at MOHAI.

First, some background: according to our artifact and donation records, we supposedly have shrunken heads in the collection. Yes, shrunken heads. Which may or may not be real. According to the very informative Wikipedia article on the subject there were some impressive fakes made for the tourist trade, some of which have ended up in museums. But ours were donated early enough in the museum's history that they could be real, and purchased when it was totally legal to buy desiccated human heads as a tourist souvenir.

The thing is, no one on the current staff has ever seen them. We have no idea if they were lost, stolen or transferred years ago, or if they are still lurking somewhere for us to find. Every time we open a dusty drawer or find a mysterious bag on the shelf we think "Am I about to find a human head in here?"

On Monday, while we were packing up stuff at our off-site storage building, I heard a yelp from my coworker who was working in the hat section. "Ew! What is that? Is it an animal?" I heard her squeal. There was commotion and we all gathered around. She had found a old paper bag on one of the shelves, and inside was this: 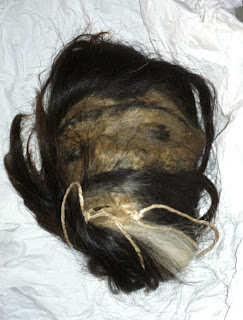 It is sort of hard to tell what you are looking at, but the thing was about six inches big and clearly a shrunken head. It didn't have an accession number, but then we found a very smudged pencil mark on the bag with a barely legible number. We put it into the database- and sure enough! It was the artifact number for missing set of shrunken heads!

We were excited and grossed out and all offering thoughts on whether or not it was real. Mostly the vote was in favor of fake, but since none of us had a real clump of dry, cranial flesh to compare to, it was hard to say with 100% confidence.

When we remarked that it was strange to discover it on April Fools Day, one of the members of our packing team got extra smiley and then tried to hide it. I didn't believe it at first, but it turned out that he had orchestrated the whole thing with the woman who "discovered" it acting as an accomplice. The head was fake and had been purchased at Ye Olde Curiosity Shop (which is a cool old Seattle store with its own interesting history) and then hidden during our lunch break. The thing was, once we found out it was a hoax it sort of dampened the mood. Later we started laughing about what a good prank it was, but in the moment I was pretty sad that we hadn't finally located one of our long lost artifacts.

Which means the shrunken heads could still be out there. Waiting. Lurking. Are they in that box of wigs? In the pocket of that dark cloak? Sleep tight museum nerds, and always remember to wear your gloves when reaching into dark corners.
Posted by ClaraBerg at 11:55 AM No comments: