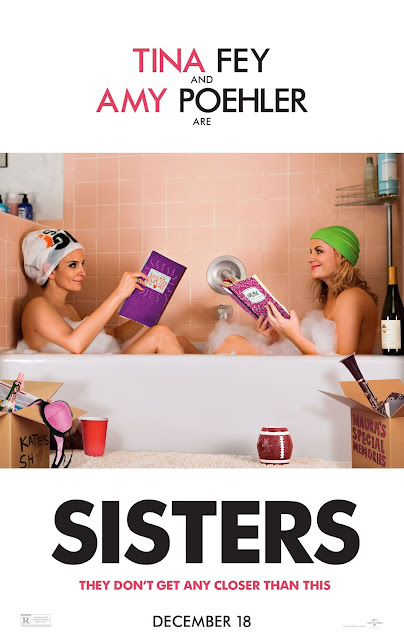 St. Catherine is looking out for us y'all!

So what should us archivists, educators, hat enthusiasts, and unmarried folks wish for this year? Here are a few I came with. I decided to break out of the rhyming format and just go free form.

St Catherine, St Catherine, O lend me thine aid. Guide my eye and my hand as I pass over the hat collection in inventory. Give me compassion for the ugly and fragile, enthusiasm for those rich in provenance, and hope for those whose provenance is not yet known. And give me courage when facing hats with giant bird faces or weird fur appendages, for they are creepy, St. Catherine.

St Catherine, St Catherine, O lend me thine aid. Help me to find a winter hat that is warm but that won’t make Olivia embarrassed to be seen with me. Draw back my hand when I reach for that 1990s Blossom hat that always calls to me from the depths of the closet.

St Catherine, St Catherine, O lend me thine aid. Impart thy wisdom on those who call me with donation offers. When there is a voicemail, let the connection be good, the description concise, and the phone number recited slowly (deliver me, St. Catherine from puzzling descriptions and garbled phone numbers). And let it not be a wedding dress.

Amen.
Posted by ClaraBerg at 5:55 PM No comments:

Today, I decided I was in the mood for making lists, and decided to make one about my favorite period movies. Period dramas were basically my gateway drug into a career as a fashion historian and they continue to have a huge influence on my life. A list of 10 would be nice and round, but for some reason I could only come up with 9 that I felt truly deserved to be on my best list. Maybe there is something meaningful about always being on the search for that great movie that will round out the list. Or maybe tomorrow I'll wake up and think of the 10th and feel like an idiot for forgetting it. Whatever. There are 9. Deal with it. 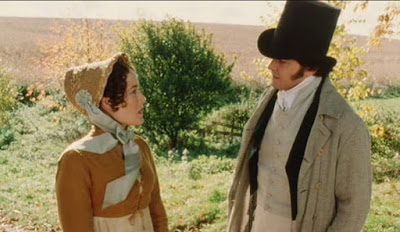 Olivia and I re-watched this the other day, and I commented that I've basically never recovered from seeing this the first time. This is where it all started. There is something about this adaptation that is so compelling, so delightful, so re-watchable. Loving this movie led to watching other period movies, reading the books they are based on, developing understanding of historical fashion and eras, and eventually led me to graduate school and the job I have now. Blame Jane Austen. Blame Andrew Davies. Blame Mr. Darcy and his proclivity for swimming.

Ok, even I'm not cheesy enough to pick the wet T-shirt. But how about the scene right after the lake dive? 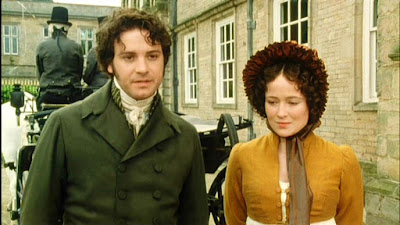 After changing clothes with historically inaccurate speed, Darcy re-emerges in this beautiful green coat with a striped vest and tan pants. Elizabeth has on this dark orange spencer jacket and they just look so perfect and elegant. 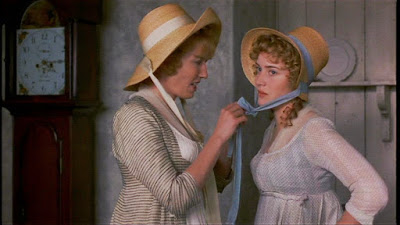 It is hard putting Sense and Sensibility second to anything, because as a feature-length movie I think it is basically perfection. This movie is excruciatingly good. The screenplay is funny at times and heartbreaking at others; the cast includes Emma Thompson, Kate Winslet, Alan Rickman, Hugh Grant, and Hugh Laurie; and it is beautifully directed by Ang Lee. 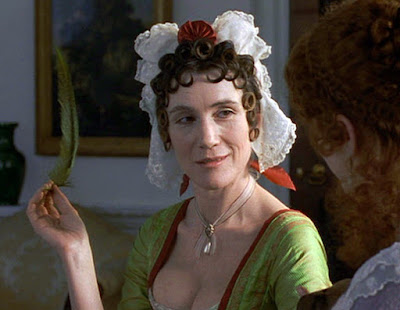 Bad girls get the most colorful and ridiculous clothes in Jane Austen adaptations and FANNY DASHWOOD IS HERE FOR THAT PARTY. 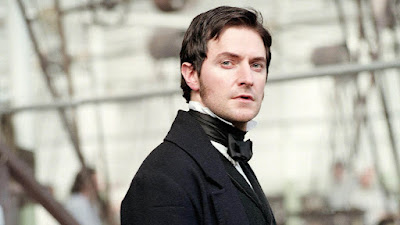 There are a few deviations from the book that bother me every time I watch this, but everything else is so good that it still comes out near the top. This story has layers of interesting commentary on class, economics, worker's rights, the role of women, religion, military service...as well as mesmerizing shots of a working 19th century mill. This is the movie you show your friend who thinks period films are just about rich people going to parties. Also, it has a male lead who gets a five star rating on the Mr. Darcy scale of tortured brooding. 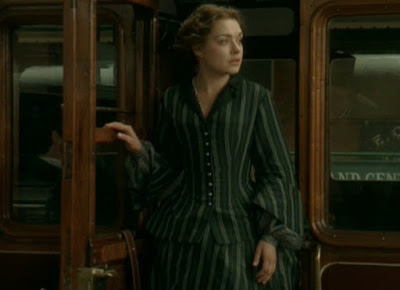 I both love and hate the ending of this movie (mild spoilers ahead). Hate, because the makeout session in the train station is WILDLY inappropriate for the time period and why oh whyyyyy is Henry there to watch...but also love because it is so good and so satisfying and everything you want after 4 hours of sexual tension between these characters. But also, Margaret wears this fantastic striped dress for this scene and I want it. 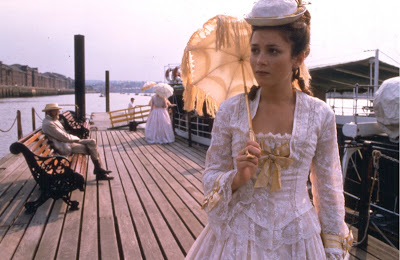 Speaking of movies with layers...where do I even start with this one? I feel like I am riveted by a different plotline every time I watch. Sometimes it is the romance of Bella and John. Sometimes it is Eugene and Lizzy. Sometimes I can't get over how terrifying David Morrissey's performance is as Bradley Headstone (which is why I struggle to warm to him as Colonel Brandon in the new Sense and Sensibility adaptation), and sometimes I'm just in love with the bromance between bored lawyers Eugene Wrayburn and Mortimer Lightwood. 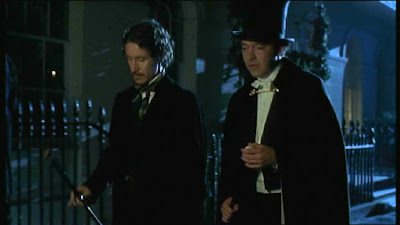 Mortimer Lightwood is the unappreciated heart of this film and his white tie evening look--complete with top hat, cane, and opera cape--is the best. Close runner up: his giant nightgown shirt, but THERE ARE NO PICTURES OF IT ON THE INTERNET. 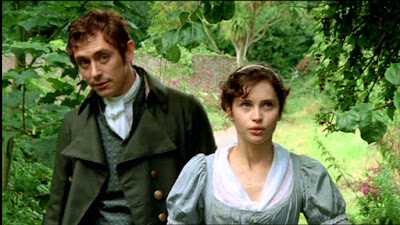 Tortured brooding is all well and good, but sometimes you want a male lead who is just plain fun. Henry Tilney is the anti-Darcy: great at parties, full of jokes, smirks, and smiles. This adaptation is delightful, short, and full of winks at the gothic romances that Jane Austen was parodying. 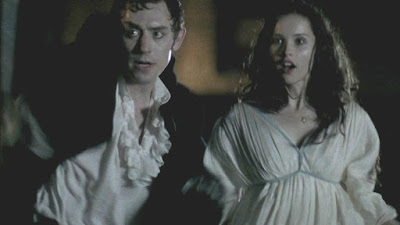 After Catherine meets Henry, she fantasizes about him fighting a duel in a disheveled white shirt and black greatcoat, while she looks on in a filmy nightgown. Hahahahaha YES GURL. 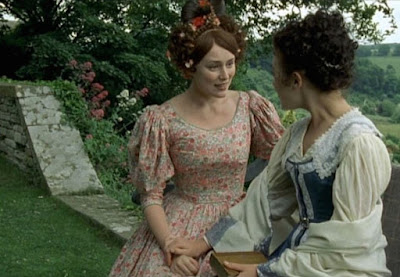 This movie is sort of quietly wonderful, and sneaks up on you. There are so many period pieces that have "sweet," "perfect" characters that are cloying and dull, but somehow Molly Gibson manages to be compelling and strong while dealing with everyone else's crap and always doing the right thing. One word of (spoilery) caution: there is no kiss at the end and it feels deeply unsatisfying. Have the final scene of North & South cued up just in case you can't handle it. 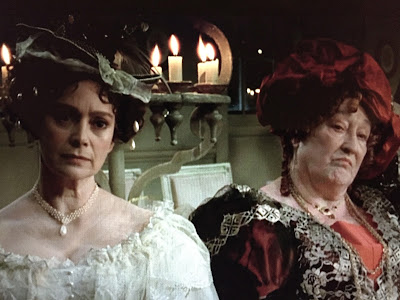 This is a horrible screen grab, but apparently there aren't that many pictures on the internet of this amazing hairstyle with pearls literally dripping out of her hair. One thing that is fun about Wives and Daughters is that it is set in the 1830s, which is an era that doesn't translate well to our modern eye. The hairstyles are wacky and the dresses are fluffy and wide. Because we are supposed to like Molly, her costumes and hairstyles are subdued and simple. But for her terrible step-mother? Release the breaks on the 1830s crazytown express! 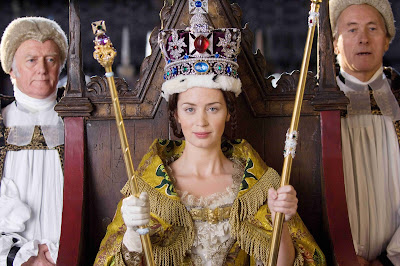 I saw this movie in the theaters. Afterward, someone asked me how it was. I thought about it for a moment and realized that I had no idea. It was so full of things I love that I felt sort of intoxicated by it and and I could't come up with any kind of objective assessment. This movie has 1) beautiful costumes and scenery 2) an empowering, female-centered story 3) history stuff and 4) a hot guy. I've now re-watched many, many times and it seems to hold up, so I'm going to declare that it is a good movie. 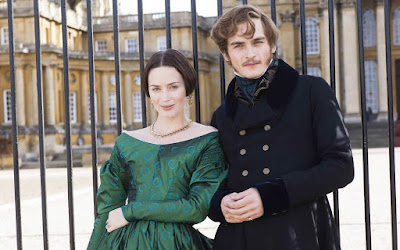 The fabric of this gown jumps out at me every time. Iridescent green with a woven pattern of blue circles. Also, everything that is going on next to her. 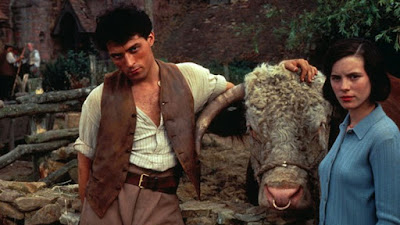 How is it that so many people have not seen this movie? Maybe because if I describe the plot it sounds embarrassingly trite: Orphaned girl from the city moves in with her dreary farm relatives and brings joy into their lives. But it is based on a hilarious satirical book, and it is surprising and cynical and charming all at the same time. It also includes a performance by Ian McKellen which you will never forget. 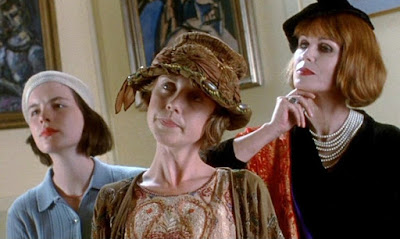 Ugh, I think MOHAI has this hat. 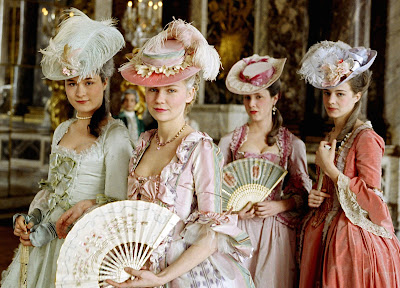 When people say they think the 2005 version of Pride and Prejudice is superior to the 1995 version I have to take a breath and pretend that that is a valid opinion and not an invitation for me to give them a 20 minute rant about how they are WRONG WRONG WRONG. But if you tell me you hate this movie, I'll be chill about it. It isn't for everyone, but I keep coming back to it and really enjoying it.

This movie also brings me full circle from the journey that started with Pride and Prejudice. Soon after I began grad school at FIT I had a friend visit me who had just started law school. We were hanging around my apartment and she saw Marie Antoinette on my shelf and expressed interest in seeing it. We put it in, and since it is the kind of movie that is easy to talk over, we started chatting and I was telling her about stuff I was learning in school and pointing out costumes that were and weren't accurate. A few minutes in she started groaning about how stressful law school was and how she should be studying right now instead of having fun. I realized that this sort of did count as studying for me. And I felt pretty good about my life choices. 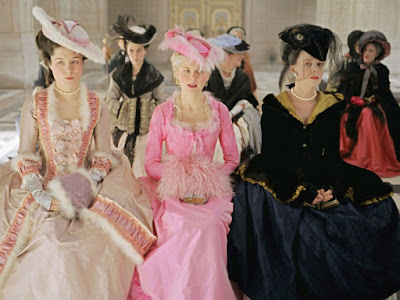 How can I choose? This movie is all visual. The whole thing is a costume moment! But if I have to pick, it would be this ridiculous pink dress with feathers and a tricorn hat. It isn't accurate. It isn't practical. But I want it.
Posted by ClaraBerg at 9:15 PM No comments: