They See Me Rollin'

This week I nearly maxed out my credit card on a $3,000 clothing-related purchase. 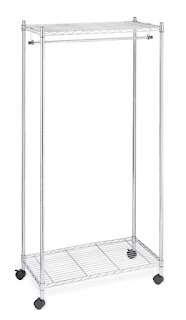 Chrome-plated steel rolling racks. 50 of them.

Ok, so it was a work purchase. They needed to get ordered this week but the museum credit card was in use, so I got the go-ahead to buy them with my own money and get reimbursed.

The deal is that our new storage space has several niches where we can store clothing on rolling racks. Initially we were going to roll a long rack into each spot (there are 12 long racks clogging the aisles in the old space), but then realized that if we bought racks that were as long as the niches were deep, we could line up several of them and increase the storage capacity of those spots. Brilliant.

Then we wrote a grant to pay for them. Double brilliant.

But the real story here is that I AM IN LOVE WITH THESE ROLLING RACKS. I bought a small batch of them a couple of weeks ago just to make sure they were good quality and we were investing in the right thing. And somehow they just triggered this irrational enthusiasm in me. I assembled two the first day they arrived, and then that night I had a dream about them. When I woke up the next morning I couldn't wait to get to work to start assembling the rest of them. THEY ARE SO PRETTY AND SO EASY TO ROLL AROUND AND DID I SAY PRETTY AND ALSO THE WHEELS LOCK!!!

Is this how men feel about sports cars?
Posted by ClaraBerg at 5:52 PM 4 comments: 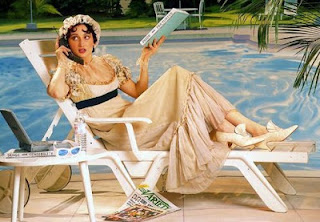 If you know me, you know that I love Jane Austen.* Even if you don't know me or Jane Austen, you probably know that her works are something of a pop culture cash cow. I have mixed feelings about this. Sometimes I take a purist "don't mess with Jane" attitude, but sometimes I willingly buy into it. I mean, I own a modern-day Pride and Prejudice movie made by Mormons which I have watched more times than I'd like to admit. There is a right way and a wrong way to mess with Jane, and I'm going to lecture you on it now.

Last Sunday, my roommate and I decided that we wanted to enjoy all the fun parts of the Super Bowl (snacks, spending time with friends, sitting around in oversized shirts, Beyonce) but skip the boring parts (football). So we bought some food, rented some Friends (the TV show, not the social concept), put on some Destiny's Child hits, and danced around in our favorite dumpy clothing (for me it was a gigantic shirt with raccoons on it). Our video store rents everything 2 for 1 so we had to get another show or movie. I advocated for Lost in Austen a miniseries in which a modern day fan of Jane Austen finds herself transported to the world of Pride and Prejudice. I thought it might be fun.

It turned out to be pretty unwatchable. The main character was unpleasant and obnoxious and as she wreaked havoc in the P&P world, I just got more and more disgusted.


I resolved to give it a full hour, but only made it 40 minutes. I then tried to skip ahead and see if it got better, but instead ended up at a point where Jane was miserably married to Mr. Collins and Bingley was running off with Lydia. Ugh. Bleh.

Strangely, in the same week, I had a second opportunity to be entertained by the mangling of Miss Austen. Local theater company Jet City Improv is donating something to the museum collection, and the guy facilitating the donation told me about their latest "improvised play" called Austen Translation. It sounded intriguing, so on Friday I went.


There was a narrator and every actor had an assigned first name, but how they were related to each other, their social status, and who falls in love with whom was all made up that night. 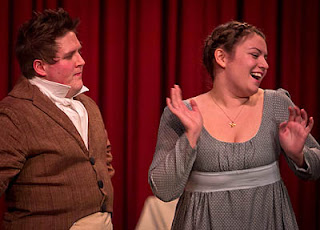 My night was the tale of Elinor Quackenbush, who was courted by new-in-town clergyman Frederick Fredericks and local braggart Walter Cavindish. Scenes were regularly stolen by her dim-witted twin sister Harriet, and elder sister Violet who was of "a sickly constitution and often near death." In the second act, Violet kept appearing with new arm-slings and eyepatches, and when Elinor said something particularly cruel to her she ran off stage sobbing "You know I'm allergic to my own tears!" It really looked like Elinor was falling for Mr. Thomas, but after a twin-based mistaken identity marriage proposal, Thomas and Harriet ended up together and Mr. Cavindish made a surprisingly charming declaration of love ("All my life I've known I was better than everyone else, but that changed when I met you"). It was ridiculous yet satisfying at the same time.

Austen Translation was more irreverent with Jane's work than Lost in Austen, yet somehow it was way better.  I think Lost in Austen went wrong because it messed with things that make Pride and Prejudice good in the first place. Watching the story unfold incorrectly because Elizabeth Bennett has been replaced by Annoying McStupidBangs wasn't fresh or exciting, it was just sad. But Austen Translation poked fun at Austen tropes while creating something new. It was goofy, awkward, romantic, funny, and exciting because no one knew exactly where it was going.

I'll leave you with one of the best "yep, this is improvised" moments from the show. The characters we had already met were going to church, where they were encountering people who weren't yet identified.

Apparently next month they are making up a Gilbert & Sullivan opera. YES.

*I should get points for resisting the urge to start this post with "It is the truth universally awknowledged..."
Posted by ClaraBerg at 7:53 PM No comments:

This week I vacuumed one of MOHAI's most significant, and most fragile artifacts: The Petticoat Flag.


The story of the petticoat flag is that it was made during the "Battle of Seattle" in 1856 -- a conflict between U.S. troops and Native people. During the fighting, settlers fled to a nearby blockhouse for shelter. A group of women decided to spend the time sewing this flag, using strips of red wool and white linen from their petticoats. The blue may have been a petticoat or a blanket, and the hang loops on the top are made of printed cotton. (About the orientation: It doesn't look nice on both sides so we can't just flip it over. It was originally meant to hang vertically which would have put the stars in the upper left corner).

Textiles weren't cheap or easy to come by in those days--certainly not for women in a small pioneer town. Add to that the fact that they were probably giving up clothes off their bodies for this task, and I find the story very touching.

Stirring historical context aside, this thing is super old and in not great condition. The linen has yellowed, the blue fabric is thin and shredding to bits, and the red wool has survived multiple assaults by hungry bugs. That picture above is old, and just looking at it makes me shudder. Since then it underwent serious conservation work and that sucker is now stitched down flat on a padded board. None of this casual, wrinkled "I unfurled this with a swish of my wrists" look. That isn't even the scariest picture we have of it:

Now we avoid touching it or moving it whenever possible. Instead of taking it out of its display at the old museum and packing it, the entire display was rolled onto the moving truck. Once inside the new museum, the old case was opened and the flag was carefully whisked into its new home. The new case is tightly sealed and has this special glass that is opaque until you trip a sensor and then a dim light makes the flag fleetingly visible.

As I was gazing at it in its new home, I started noticing all this dusty crap on it. At first I panicked because I thought it was frass (aka bug poop), the telltale sign of insect activity. But I had checked it very carefully before it left the old place. How could it have exploded in bugs during one moving-van ride? My next theory was that it was dust from the old plexiglass cover that slid onto the flag as the cover was removed. That made more sense considering some of the "stuff" appeared to be glitter, and we all know that no bug is magical enough to poop glitter.

Problem was, the only artifact vacuum we had on site didn't have the knob where you could control the amount of suction. And seriously, if any artifact in the collection needed to be vacuumed on low, it was this one. So basically "vacuum the petticoat flag" was on my to-do list for about two months before I finally found an opportunity to have someone schlep the variable speed vacuum to and from the new museum for me. But this week I did it and it was actually a little less terrifying than I expected. I also gave the white edge of the padded board a good clean, so if it does turn out to be bug activity, the frass will be visible immediately.

Although if that happens, you'll probably see me fleeing to the nearest blockhouse.
Posted by ClaraBerg at 9:16 AM No comments: