A few weeks ago I posted about the completion of the shoe inventory and the emotional roller coaster it put me through. Well now that is officially DONE and so it's on to the hats!

But basically, the hat inventory is the same agony and ecstasy of the shoes. There is lots of: "Oh wow, I just touched it and all the feathers started falling off, well hopefully it won't have a local label...aw crap...MacDougall-Southwick, Seattle" and "Geez Frederick & Nelson seemed to make a lot of hats with black netting." But there are some additional complicating factors that the shoes didn't have.

Two years ago, the hats were the focus of a frantic moth-related bag-and-contain project. Since then, they have basically just been chillin' in their archival plastic prisons, waiting to be checked for bugs and stored more appropriately. So while it is exciting to finally begin working on them, it means lots of additional steps above and beyond the basic inventory procedure.

Regular inventory is instant gratification--you pull a box off the shelf, discover a bunch of cool stuff you've never seen before, put the box back, and start on the next shelf. But now it's like-- oh hey, before you put those back on the shelf and move on to the next exciting discoveries, you need to check them for bug evidence, decide which ones to freeze, pack the ones for freezing, do some vacuuming, build boxes or pack them in existing boxes, make labels...

Plus I'm moving a bunch of hats off shelves that should be for shoes, and discovering boxes of hats in odd places, and since the official hat shelves are already packed full I'm not sure where everything is going to go...

Big projects always start like this though-- at the beginning you haven't figured out a system and you also haven't done enough to see any satisfying results. Right now it just feels like I am making an even bigger mess. But I have faith that we'll figure out a system and soon I'll be encouraged by the sight of happy hats in boxes on completed shelves.

Dance In The Textile Room Like No One's Watching

Bonus feature: I was previously convinced that I had identified the ugliest hat in the collection. I've already found several which may be strong contenders for the title. Stay tuned.
Posted by ClaraBerg at 12:44 PM No comments:

Things I Learned While Preparing My 1920s Talk

Two weekends ago I was scrambling to get my "Seattle Fashion in the Roaring Twenties" talk finished and last weekend I was basking in the triumph of presenting it and feeling awesome about it.

Now that I have recovered (although I am giving it again in August, get tickets here) I want to share some of the exciting things that I came across during my research.

For those of you still wondering about the identity of "Mrs. X" I mentioned in an old post about diva ladies in the Seattle fashion business, her name was Nellie Martin Carman. If you don't feel like following the link to the previous post here is he short version: She worked as a buyer and head of ladies wear at J. Redelsheimer & Co. for a number of years in the early 20th century. Things weren't great in her marriage but when she tried to file for divorce from her husband (Mr. Carman) he turned around and accused her and her employer (Redelsheimer) of an inappropriate relationship.

The whole thing blew up in Mr. Carman's face though because it came out that a key witness (who said he saw the pair "embracing") turned out to have been bribed. Mr. Carman's case was immediately thrown out.

Soon after all that Nellie set out on her own and her "Carman" store enjoyed meteoric success. In 1921 her store took up an entire building downtown and the Seattle Times gushed: “The growth of the Carman Shop from a modest beginning six years ago to its present rank as one of the largest high-grade specialty shops for women on the Pacific Coast forms one of the most interesting annals of merchandising successes in Seattle’s history.” 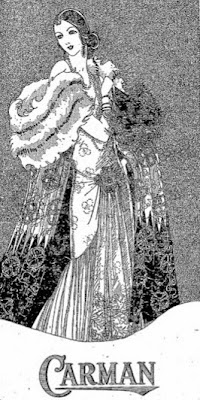 When Nellie Carman died she left money for a local scholarship fund, which is still active today.

As you may know, I tend to be cautious about claims that someone "invented" this or that piece of clothing. Most of the time, when you look back at some iconic look like the little black dress or the mini-skirt, you find several designers working on similar ideas at the same time. They aren't copying each other, they are just all tuned into the same zeitgeist. So take this with a huge grain of salt, but the Saxony Knitting Company of Seattle (later Sportcraft) claims to have invented the one-piece knitted bathing suit.

Before the one-piece, bathing costumes were multi-part and multi-layer. A two-piece didn't mean you were showing off your midriff, it meant that you had a pair of bloomers that went under a dress, or maybe you had a three-piece consisting of an under layer, a blouse, and bloomers. The knitted one-piece caused quite a stir because it did what women's bathing suits do today: cling to the body in a single, form fitting layer.

So while I'll need to do a little more research into this claim, it seems like at the very least the Saxony Knitting Company was part of the first wave of designers and companies to make the knitted one-piece. And considering how revolutionary and influential the style was, and how far away Seattle was from everything else, the fact that they are even on the radar is pretty exciting.

Seriously. Who saw that coming? Somehow he makes a bow tie with outdoor gear WERQ
Posted by ClaraBerg at 7:55 AM No comments:

Sorry I've been MIA. For the last couple weeks I've been devoting most of my extra energy to my 1920s fashion lecture so blogging got pushed to the side. The talk was on Saturday but since then I've been busy with weekend shopping and the Mad Men finale.

Obviously, my life is the hardest.
Posted by ClaraBerg at 9:56 PM No comments:

The Many Faces of the Shoe Inventory

The inventory of the shoe collection is almost done! It has been interesting and exciting, and I've gotten emotionally invested in some of the discoveries. My volunteers and interns have become familiar with my shoe-related mood swings.

Here are the four most common emotional states of the shoe inventory:

When a gorgeous pair of shoes in perfect condition turns out to have no Seattle story whatsoever:

We can keep them for "study" purposes...or something...

When a pair of shoes that are stained and falling apart turn out to have a rare Seattle label:

Can we not pay the light bill for a month and put some more money in the conservation fund?

When a pair of shoes that are in poor condition have a non-local label and the database says explicitly that they were worn on the other side of the country.

When a gorgeous pair of shoes are in excellent condition and have clear Seattle provenance:

I may have screamed "WALLIN & NORDSTROM!!!" while peering into a pair of boots on Friday.
Posted by ClaraBerg at 1:22 PM 1 comment: